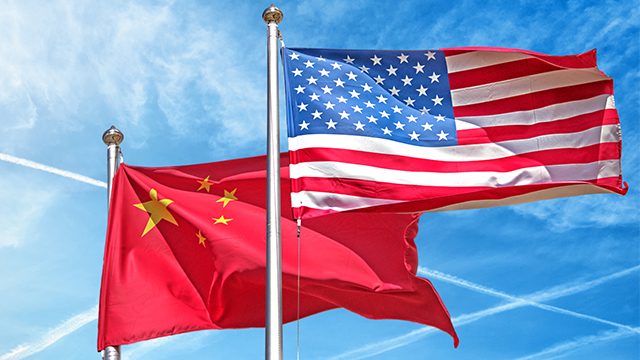 US-CHINA RELATIONS. The flags of the United States and China stand side by side.

Facebook Twitter Copy URL
Copied
'What the United States has done is not to help anyone but to serve its own geopolitical interests,' the spokesperson of the Chinese Embassy in the Philippines says

MANILA, Philippines – China on Tuesday, December 20, condemned the United States over its latest move to back up the Philippines against the continued presence of Chinese vessels in the West Philippine Sea.

In a statement, the spokesperson of the Chinese Embassy in the Philippines says, “We strongly deplore and firmly oppose” the statement issued by the US, adding the “unfounded accusations… attempt to stir up troubles and drive a wedge between China and the Philippines.”

“The US keeps meddling in the South China Sea disputes and trying to drive wedges between countries in the region, creating tensions and harming regional peace and stability,” it said. “What the US has done is not to help anyone but to serve its own geopolitical interests.”

This was in response to a December 19 statement issued by the US Department of State where it called on China to respect the international law of the sea in the South China Sea and its legal obligations in relation to the historic 2016 Hague ruling.

The US issued the statement five days after Philippines’ Department of Nation Defense officer-in-charge Jose Faustino Jr. expressed “great concern” over China’s continued presence, saying that the information about vessels near Iriqouis Reef and Sabina Shoal as “unacceptable.”

But the Chinese Embassy insists the two countries “belong to the Asian family and have stayed friendly for thousands of years,” adding that that “it is only natural for neighbors to have differences.”

“The two countries share the Asian wisdom of settling differences through dialogue and consultation,” it said.