REBUILD. Workers clear the rubble at the entrance of the Chirst the King parish in Bantay, Ilocos Sur on July 29, 2022, after it collapsed during the magnitude 7 earthquake that struck the province.

The message, sent by Xi to Marcos on Saturday, July 30, saw the Chinese leader express “shock” over the magnitude 7 earthquake that left at least 4 people dead and some P33.8 million worth of damage.

“On behalf of the Chinese government and people, and in his own name, Xi expressed deep condolences over the deaths, and extended sincere sympathies to the bereaved families and the wounded,” Xinhua reported.

The Chinese government earlier said it was providing P10 million worth of emergency supplies to affected areas, along with the Philippines Chinese Chamber of Commerce and Industry Inc.

Aside from this, the Chinese Enterprises Philippines Association also prepared P3.4 million-worth of relief bags. 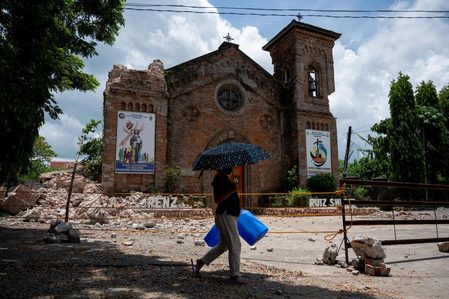 During a visit to Abra on Thursday, July 28, Marcos presided over a briefing on the post-earthquake situation in Abra and nearby areas led by provincial and regional officials. He was joined by his sister, Senator Imee Marcos, and his cousin, House Speaker Martin Romualdez.

After the hour-and-a-half-long meeting, the President zeroed in on two points: bringing life back to normal by making sure structures are safe and usable, and making sure the national government coordinates with local government units in planning and implementing those plans. – with a report from Bea Cupin/Rappler.com