MANILA, Philippines – On Christmas Day, Filipino Catholics gather in churches to celebrate the coming of the Lord as a community.

After a 4-week advent celebration and 9 days of Simbang Gabi (night Mass) or Misa de Gallo (dawn Mass), the Filipino Christmas tradition culminates in a high Mass on the Eve of the birth of Jesus, December 25.

This year, Rappler will house the live stream of a Christmas Mass, for those who are unable to go to a church.

Rappler has also been releasing daily Mass readings and gospels for those who were not be able to attend Mass. You can read Tagalog and English versions of the Christmas day scripture below. 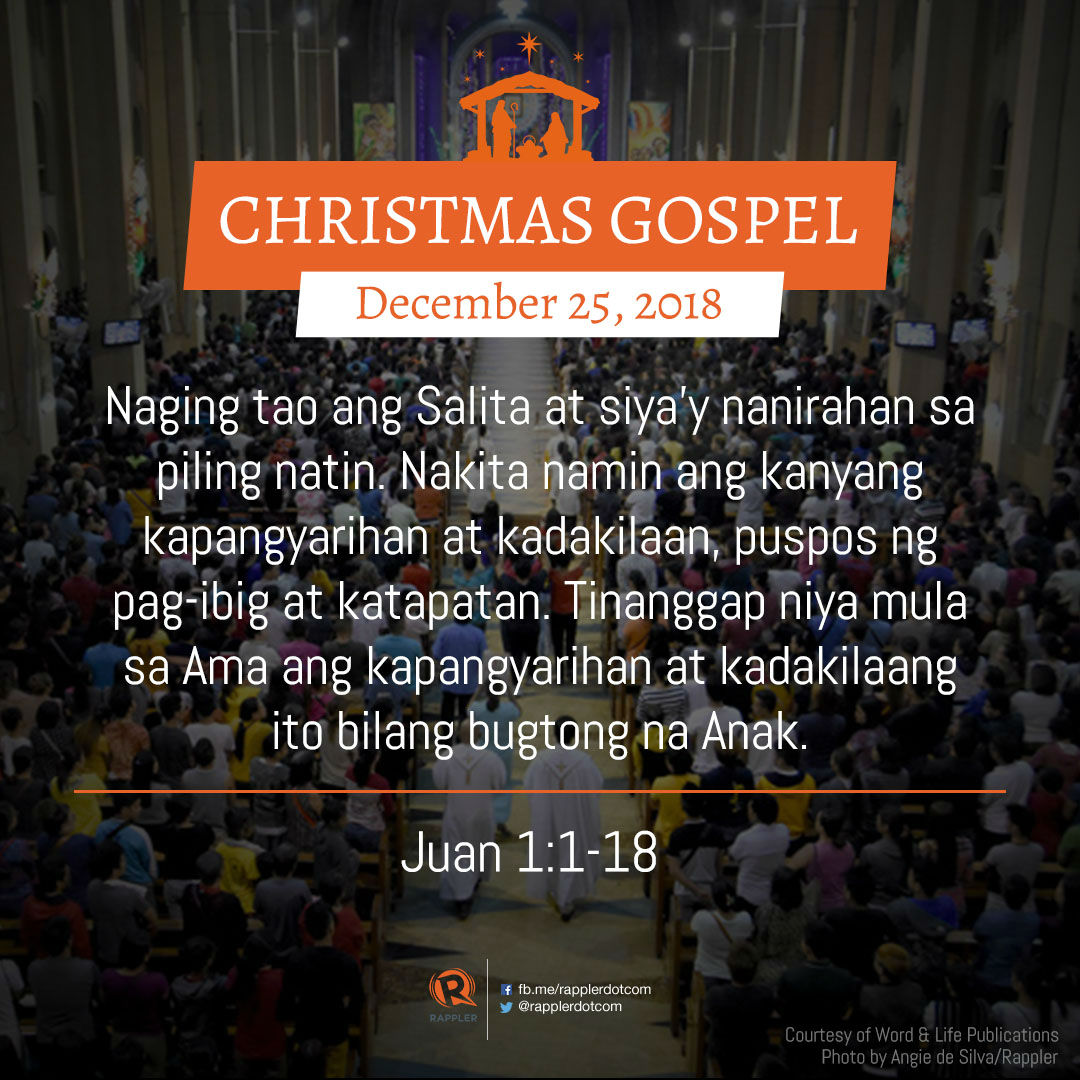 How beautiful upon the mountains are the feet of him who brings glad tidings, announcing peace, bearing good news, announcing salvation, and saying to Zion, “Your God is King!”

Hark! Your sentinels raise a cry, together they shout for joy, for they see directly, before their eyes, the Lord restoring Zion. Break out together in song, O ruins of Jerusalem!

For the Lord comforts his people, he redeems Jerusalem. The Lord has bared his holy arm in the sight of all the nations; all the ends of the earth will behold the salvation of our God.

Brothers and sisters: In times past, God spoke in partial and various ways to our ancestors through the prophets. In these last days, he has spoken to us through the Son, whom he made heir of all things and through whom he created the universe.

He is the refulgence of God’s glory, the very imprint of his being, and who sustains all things by his mighty word. When he had accomplished purifi cation from sins, he took his seat at the right hand of the Majesty on high, as far superior to the angels as the name he has inherited is more excellent than theirs.

For to which of the angels did God ever say: “You are my son; this day I have begotten you”? Or again: “I will be a father to him, and he shall be a son to me”? And again, when he leads the fi rst-born into the world, he says: “Let all the angels of God worship him.”

What came to be through him was life, and this life was the light of the human race. The light shines in the darkness, and the darkness has not overcome it.

The true light, which enlightens everyone, was coming into the world. He was in the world, and the world came to be through him, but the world did not know him. He came to what was his own, but his own people did not accept him.

But to those who did accept him he gave power to become children of God, to those who believe in his name, who were born not by natural generation nor by human choice nor by a man’s decision but of God.

And the Word became flesh and made his dwelling among us, and we saw his glory, the glory as of the Father’s only Son, full of grace and truth.

Have a wonderful day and a happy Christmas! –Rappler.com