MANILA, Philippines – The Commission on Elections (Comelec) is set to meet with representatives of presidential and vice presidential aspirants later this week to finalize the guidelines for its debates which will be held in mid-March, spokesman James Jimenez said on Monday, February 28.

Presidential aspirants will square off on one stage on March 19; candidates seeking the vice presidency will follow suit a day later.

“When we brief them about the format, it will be as a group. So that will happen this week,” Jimenez said. “We have a memorandum of understanding (MOU) that we want the candidates to sign, so our rules and the expectations are clear.”

The Comelec said it is also preparing a debate kit for the candidates.

“I might offer you a preview into that… the kit will tell the candidates the treatment of the paper after they used it. If they’re scribbling notes on that, it won’t be thrown in the trash afterwards. That is literally presidential records, so those will be preserved as property of the Comelec,” Jimenez added.

The UniTeam tandem disputed this claim by the Comelec.

The camp of Davao City Mayor Sara Duterte said they have not received any formal invitation from the Comelec, and that she will skip the debate. 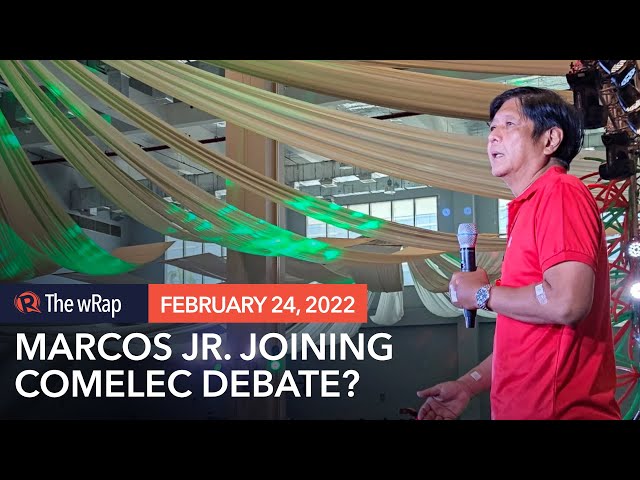 While Jimenez, in response to Rodriguez, released a February 11 letter from the Marcos camp which stated his “readiness to join [the debate],” Marcos Jr.’s national campaign manager Benhur Abalos said it didn’t mean his participation was set in stone.

“BBM (Bongbong) asked me to write a letter to all presidential candidates and the Comelec to talk about the format of the debate,” Abalos said in Filipino, claiming that the Comelec has yet to answer his letter. “I just read from the papers that [the Comelec said] they’re already setting the debate.”

Asked about Abalos’ latest statement, Jimenez on Monday noted that the Comelec on February 23 “held a meeting with the representatives of the different campaigns,” who were made aware that the format of the debate will be single-moderator.

Jimenez also clarified that it is not unusual for candidates to ask about the general topics that will be discussed in a debate.

“That is not unfair. In any debate, even in the PiliPinas Debates in 2016, we did inform the campaigns about the general topics to be discussed. This is not ‘everything under the sun,'” Jimenez said.

“Every candidate will have the opportunity to do whatever research they need to do in preparation for the debates, because they will all be given the general area around which the questions will revolve,” he added. – Rappler.com