Sep 28, 2021 4:16 PM PHT
Lian Buan
Facebook Twitter Copy URL
Copied
'To date, no case has resulted in a conviction through the sole effort of the Inter-Agency Committee as a super body,' says the Commission on Human Rights

The mechanism of the Department of Justice (DOJ) to solve extrajudicial killings (EJKs) has been slow in holding perpetrators accountable, the independent Philippine Commission on Human Rights (CHR) said.

The CHR made the assessment in its 2020 annual report on the human rights situation in the Philippines uploaded on its website in August 2021. Bayan Muna Representative Carlos Isagani Zarate cited it during the House plenary debates on the DOJ’s proposed 2022 budget on Tuesday, September 28.

“The mechanism has been slow in holding perpetrators liable for violations,” the CHR said in its report.

The DOJ chairs the Inter-Agency Committee (IAC) created under Administrative Order No. 35, signed by then-president Benigno Aquino III in November 2012. The committee aims to solve politically-motivated killings – not just the individual cases, but the trend as a whole.

“To date, no case has resulted in a conviction through the sole effort of the IAC as a super body,” said the CHR report.

In its May 2020 submission to the United Nations (UN), the Philippine government reported that of the 385 cases the IAC has handled, including cases from 2001, there were only 13 convictions.

Gonzaga, as the budget sponsor, answers questions from interpellators on behalf of the DOJ.

The government report to the UN also showed that in most or 127 of the cases handled, the perpetrators were cleared.

In reference to these numbers, Zarate said, “How does the IAC look at, assess its role to resolve its unsolved cases when it has a higher batting average of clearing perpetrators than it has in getting convictions?” 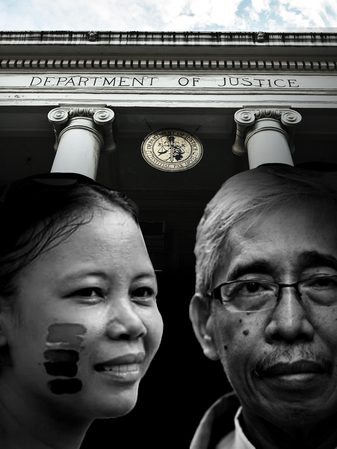 Gonzaga repeated the consistent answer of the DOJ that the IAC has difficulty getting witnesses to cooperate.

There has been a general trust problem in the IAC because state actors are the accused perpetrators in these cases, and the police and the military can become part of the mechanism.

“We have to open up communications. ‘Yung pamilya natatakot pumunta sa prosecutor kasi state actor ‘yung respondent. We have to be realistic, practical, open up – we have to help them open up to the DOJ,” said Gonzaga.

(The family is scared to go to the prosecutor because the respondent is a state actor.)

Rights group Karapatan has earlier expressed its dissatisfaction with the panel’s work, saying “it has yet to show any significant progress” for the panel’s two most high profile cases – the murders of activists Randall Echanis and human rights defender Zara Alvarez. – Rappler.com