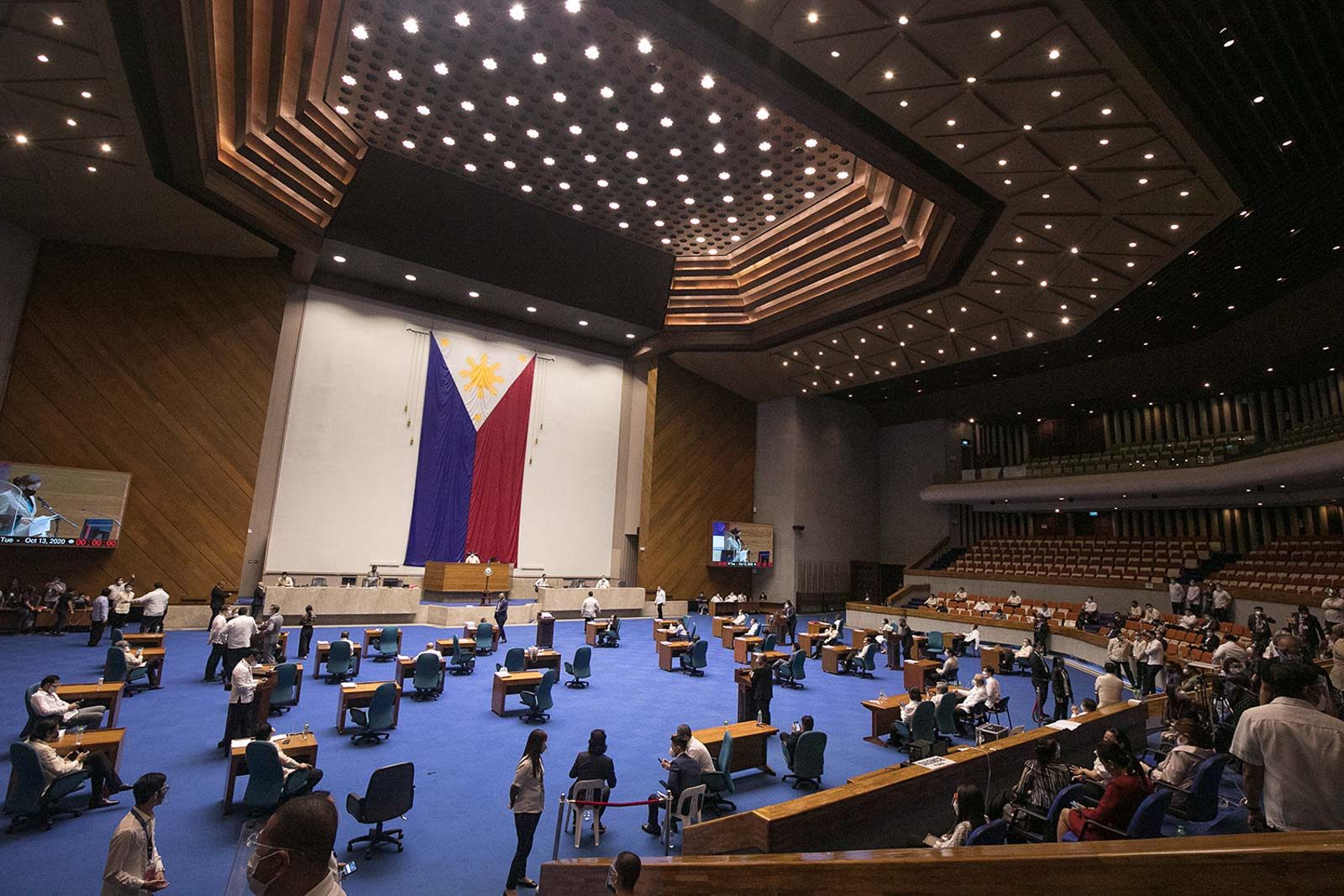 IN SESSION. The House of Representatives holds its plenary session on October 13, 2020.

Congress on Wednesday, December 9, passed the proposed P4.5-trillion trillion budget for 2021, the first to be crafted under President Rodrigo Duterte’s administration amid the coronavirus pandemic.

Both chambers of Congress separately ratified the bicameral conference report on the 2021 General Appropriations Bill (GAB) on Wednesday, December 9, mere hours after the bicam approved it.

The 2021 GAB would set aside P72.5 billion for the purchase of COVID-19 vaccines, which the government targets to administer to the general population by the second quarter of 2021.

Of this amount, P2.5 billion are lodged under the Department of Health, while P70 billion is under unprogrammed appropriations, dependent upon the availability of government revenues next year.

The proposed appropriations for COVID-19 vaccines is on top of the P10 billion that the Bayanihan to Recover As One Act has already allotted for it. This puts the country’s total budget for the COVID-19 immunization program at P82.5 billion in 2021.

The 10 agencies that would receive the highest allocations under the proposed 2021 national budget are as follows:

The 2021 GAB will now be transmitted to Malacañang for President Rodrigo Duterte’s signature.

He has until the end of the year to sign the GAB into law or to veto parts of the budget. Otherwise, the government would be forced to reenact this year’s funds, which does not have allocations for programs aimed to combat the COVID-19 pandemic.

COVID-19 infections in the country are still steadily rising, with the total number of cases at 444,164 as of Wednesday afternoon. The Department of Health said 8,677 people have died from the disease, while 408,164 have recovered.

Drilon: Where will funds for vaccines come from?

Senate Minority Leader Franklin Drilon raised caution over the fact that a vast majority of the budget for COVID-19 vaccines – P70 billion – is under unprogrammed appropriations, dependent upon the availability of government revenues.

“All of us are unclear how we will fund the P70 billion unprogrammed funds because, I’m sorry to say, what you enumerated as excess collection, given the pandemic – there is no excess in collection,” Drilon told Angara.

Angara earlier said he had an assurance from the Department of Finance that there is a high probability there will be enough non-tax revenues or even excess collections to fund unprogrammed appropriations.

“We will be having deficits. New revenue collection? Let us be candid with each other. This is not forthcoming. Where will this be coming from?” Drilon added.

He reiterated his position that the government should realign some P33 billion held by the Philippine International Trading Corporation (PITC), which he said was “lying idle” and could be put to good use in buying COVID-19 vaccines.

“It depends on the Executive, really, what they want to do with those funds [held by the PITC],” Angara said in reply to Drilon.

Several progressive lawmakers, however, strongly opposed the multi-billion worth of funds to be given to the controversial National Task Force to End Local Communist Armed Conflict (NTF-ELCAC) next year.

The NTF-ELCAC is set to receive P19.1 billion under the 2021 GAB amid the Duterte government’s intensified red-tagging of activists, including lawmakers from the Makabayan bloc.

Bayan Muna Representative Eufemia Cullamat slammed this move by Congress, saying the allocation for NTF-ELCAC should have been set aside for other sectors in dire need of more funds.

(Billions for the baseless accusations and red-tagging, acts that continue to trample our rights as Filipinos. The P19.1-billion fund of the NTF-ELCAC should be removed.)

ACT Teachers Representative France Castro also said the Duterte administration “would rather put funds in a task force that does nothing but label as terrorists those who tell the truth.”

From the original proposal of P666.5 billion, the bicameral version allotted P694.8 billion to the DPWH. Lacson had wanted to slash the agency’s budget by P63 billion because of its “low utilization rate” and half-baked, rehashed local infrastructure projects.

Meanwhile, the bicameral budget bill cut the DICT budget by P8.46 billion, and reduced the allocation for the national broadband program from P5.9 billion to just P1.9 billion.

Lacson asked Senate finance committee chief Sonny Angara what the “wisdom” was behind these adjustments.

However, there was no turning back from ratifying the budget bill, and Lacson said lawmakers should just “try better next time.” – Rappler.com