ANGELES CITY, Philippines – The city council of Angeles, Pampanga’s long urbanized city, has launched an investigation into Primewater’s local operations as thousands of residents in almost all barangays bewail the worsening water situation .

Residents have been airing their gripes on social media since Wednesday, May 18, giving details of service interruptions, water pressure ranging from low to none, and dirty water coming out of faucets.

City councilors Jesus Sangil and Alfie Bonifacio told Rappler via phone interviews on May 19 that the Sangguniang Panglungsod had approved a resolution, PR-1530-05-22, urging Primewater Angeles City to shed light on the worsening water consumer conditions.

According to Sangil and Bonifacio, committee chairs on public works and public utility, respectively, a total of 70,000 consumers from the 22 of 33 barangays are affected.

From households to businesses, the complaints are similar: water conditions have worsened since Primewater, owned by the family of Senator Cynthia Villar, took over the Angeles City Water District on November 16, 2020. Its contract includes the financing, development, operation, and maintenance of the water supply and septage management system.

Harvey Santiago, resident of Barangay Claro M. Recto, told Rappler that the low pressure usually starts at around 9:30 pm, the supply stopping completely by 10 pm and resuming around 2 am.

Their family of 15 members, who live in the same compound, has adjusted to the inconvenience of the situation by filling up containers to prepare for the nightly interruption, he added.

“Every night is a struggle. What’s more frustrating is that we are paying much higher now plus VAT (value added tax) compared to when it wasn’t sold to Primewater, but we get poorer service now, and a lot of inconvenience,” Santiago said.

“When it was [under the] ACWD (Angeles City Water District), there was no VAT because it wasn’t privately-owned then, but now the standard is 12% VAT,” said Santiago. 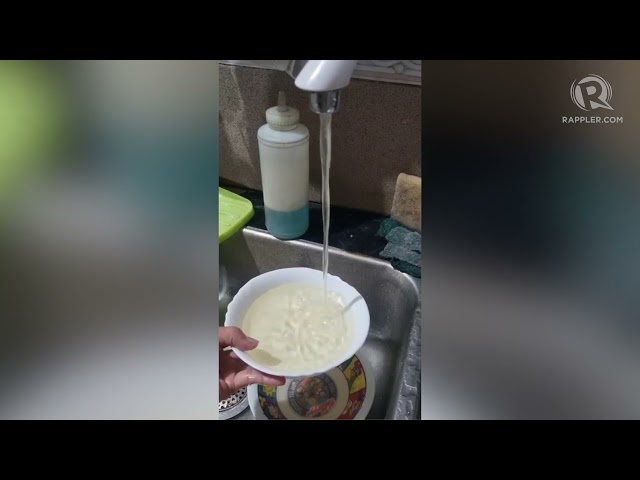 Santiago also posted his complaint on Facebook in 2021 to call the attention of Primewater as well as the local government officials. He said the situation has yet to be resolved until now.

Another consumer, Virginia Magsino of Barangay Salapungan, has a similar plight.

“From 10 pm to midnight, we don’t have water. It comes back in the morning, but sometimes we also lose supply without any advance notice. When we lose power, we lose water. But even when the power returns, we still don’t have water, so I end up taking a bath with a gallon of mineral water,” Magsino said in Filipino.

Rappler has tried for days to get the side of Primewater via email and text messages, even dropping by its local office. But no one has gotten back to us. We will update this story once Primewater responds.

Sangil said a series of public hearings had been conducted, but Primewater stopped cooperating with the council.

Sangil said they had been seeking a timeline with Primewater as complaints from other municipalities were also starting to emerge.

“We need a compelling explanation from them and to face us fair and square,” said Sangil.

“The agreement is for them to provide potable, sustainable supply of clean water, right? It’s been two years, but the problem has just worsened, and the same problems are being raised by other local government units,” he said in Filipino.

“We keep on telling them (Primewater), but their cooperation just stopped; they don’t want to attend hearings anymore. What do we tell them? Give us a timeline [for] these areas that are affected,” Sangil added.

Bonifacio noted that Primewater must have fast-tracked the acquisition and the fallout is great inconvenience to consumers.

“Minadali nila eh. (They rushed it.) Before you buy out something, you [should] have already identified the issues, whether it’s the pipeline, the tools, so that once you start to take over, you are ready,” said Bonifacio.

Based on the advisories posted by Primewater Angeles City on their Facebook page, the low pressure and water interruptions were due to grounded pump and motor as well as technical problems. Scheduled electric interruption and flushing activities have also been cited as reasons. – Rappler.com

Joann Manabat is a Luzon-based reporter and an awardee of the Aries Rufo Journalism Fellowship.