BACOLOD CITY, Philippines – New COVID-19 cases in Bacolod City more than doubled from January 16 to January 17, surging to 187 infections from only 88 the previous day.

The city’s total caseload was the second-highest for Western Visayas, surpassed only by the 193 new infections in Negros Occidental, which has four times the population of Bacolod, its highly-developed capital.

The Department of Health in Western Visayas has now placed both the city and the province as “high-risk” for transmission.

“It is expected that Bacolod will be classified as ‘critical’ in one or two days of the current surge,” the Corazon Locsin Montelibano Memorial Regional Hospital (CLMMRH) warned. 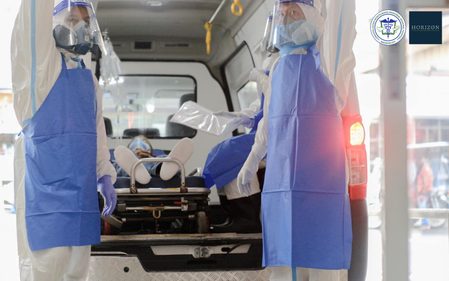 He urged local government heads to push for testing, contact tracing, and isolation of positive individuals.

“Test , trace , isolate, quarantine , vaccinate+boost is the only way to break the chain of transmission and stop viral spread,” he stressed.

The ADAR is the number of new cases over the past 14 days per 100,000 population. The figures in city and province are way above the threshold of one, said Drilon.

The CLMMRH’s data on samples it tested from the Bacolod Epidemiology and Surveillance Unit and those the hospital directly extracted also increased over the past two days, from 27.8% for the period between January 10-14 to 45.8% from January 10-16.

Drilon, citing the hospital’s analysis of cases in January said, “it is clear we don’t do enough community RT-PCR testing.” “We’re not even doing enough targeted testing’” he added, referring to testing of individuals with symptoms.

He chafed that communities would suffer if persons with mild symptoms are just left alone to undergo home-testing with rapid antigen tests.

“Those numbers do not represent the real problem because RT-PCR test numbers are too low,” he told Rappler in a phone interview.

“If they were testing right, the number would increase exponentially daily,” Drilon said.

The ideal ratio of contact-tracing and tests is ten for every confirmed COVID-19 case.

Drilon said even if the target were reduced by half, the city should have tested five times the number of the 83 new cases logged on January 15.