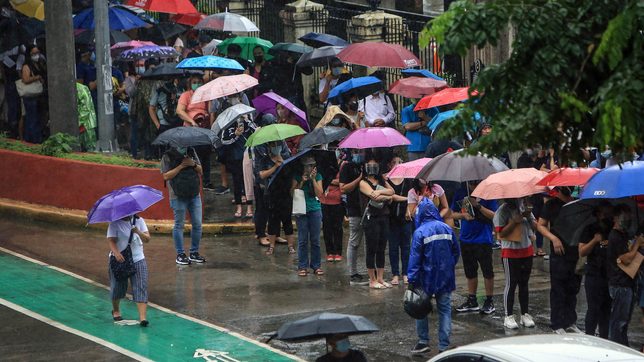 WAITING IN LINE. Manila residents wait in long lines despite the torrential rains brought by the southwest monsoon as they wait for their turn to be inoculated with the COVID-19 vaccine inside the UST campus on July 27, 2021.

The Philippines recorded more than 8,000 new COVID-19 cases for the third straight day on Sunday, August 1, as the country’s caseload neared 1.6 million.

This is the highest one-day tally in over two months or since May 28, when 8,748 cases were confirmed.

Among all cases, 63,646 or 4% are active. This is the highest total number of active cases in nearly three months or since May 7, when there were 66,626 active cases.

The DOH said two testing laboratories were not operational on Friday, while four labs failed to submit data in time for Sunday’s bullletin.

Metro Manila is set to be placed again under enhanced community quarantine (ECQ), the strictest lockdown, from August 6 to 20, in a bid to fend off the threat of a surge due to the more infectious Delta variant of COVID-19.

Before that, from July 31 to August 5, the region will be under general community quarantine with heightened and additional restrictions.

On Sunday, Apayao, Laguna, and Aklan were added to the list of areas under MECQ for the same time period.

As of Thursday, July 29, the DOH reported that the Philippines has 216 known cases of the Delta variant. There are concerns that there may be more Delta variant cases, as the Philippine Genome Center is only sequencing a small percentage of positive cases. – Michael Bueza/Rappler.com