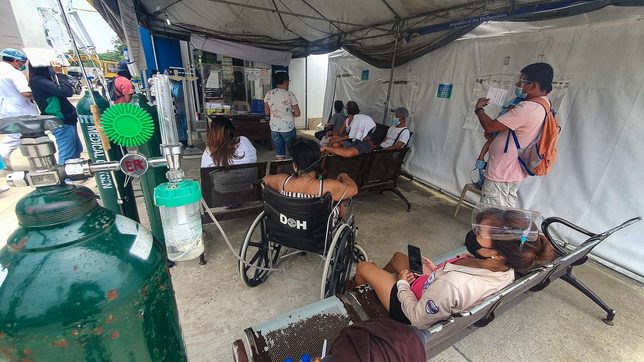 Facebook Twitter Copy URL
Copied
The highest-ever positivity rate of 26.1% means that 1 in 4 people tested is positive for the virus

Less than a day after the government announced the easing of the lockdown in Metro Manila, the Department of Health (DOH) on Friday, August 20, tallied a record 17,231 new COVID-19 cases, the most in a single day since the pandemic began in March 2020.

The DOH reported a positivity rate of 26.1% out of 64,934 tests in its bulletin. These positive cases were added to the tally of confirmed cases only after further validation. This process helped ensure cases would not be recorded in duplicate, and that all test results had been submitted, explained the department.

The positivity rate of 26.1%, which was also the highest since the pandemic started, meant that more than 1 in 4 people tested was positive for the virus.

The DOH said all testing hubs were operational on Wednesday, August 18, while two laboratories were not able to submit their data on time. The cases reflected in the bulletin were based on tests conducted two days ago.

“Based on data in the last 14 days, the 2 non-reporting labs contribute, on average, 0.03% of samples tested and 0.08% of positive individuals,” the DOH said.

Based on Rappler’s monitoring, it only took 8 days for the next 100,000 cases to accumulate.

The DOH said that the public should expect a spike in infections in the coming days. This, after the government decided to ease the quarantine restriction in virus epicenter Metro Manila beginning Saturday, August 21 until August 30.

The DOH has been under public condemnation over its poor use of P67 billion worth of public funds intended for the pandemic response. During a hearing on Tuesday, August 17, Health Secretary Francisco Duque III got emotional and said that he had been “sleepless” since state auditors released their findings.

The detection of the Lambda case in the country comes as the Philippines deals with a record-breaking surge driven by the highly infectious Delta variant. – Rappler.com