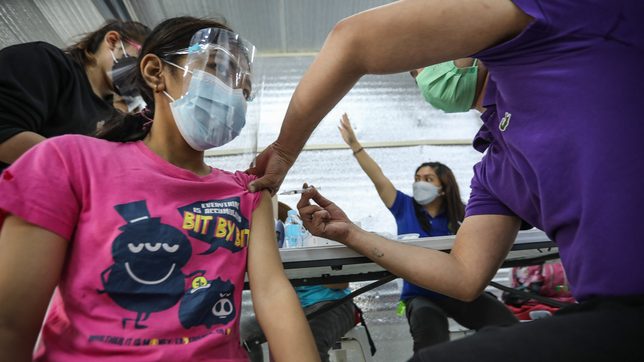 PEDIATRIC VACCINATION. Minors accompanied by their parents or guardian are vaccinated with the Pfizer COVID-19 vaccine at the Marikina Sports Complex during the rollout of the Pediatric COVID-19 Vaccination in Marikina City on November 3, 2021.

Facebook Twitter Copy URL
Copied
The lower number of cases is partly due to the lower number of tests conducted and the non-submission of testing data from 7 labs, which accounts for an average of 3% of positive individuals in the past two weeks

The number of fresh coronavirus cases in the Philippines fell to its lowest in eight months after the Department of Health reported 1,591 new cases on Wednesday, November 3.

The figure is the lowest single-day tally since February 24, before the country saw two waves of infections around March to April and later in August to September – both of which have stretched health systems strained for over a year now.

The lower number of cases on Wednesday was partly due to the small number of tests conducted and the non-submission of testing data from seven labs, which accounted for an average, 1.3% of samples tested and 3% of positive individuals in the past two weeks. Health officials said all labs were operational on Monday, November 1, a public holiday.

Despite this, it follows a recent trend of declining cases health officials have observed following skyrocketing numbers seen in September, when the country grappled with a surge in infections driven by the highly-transmissible Delta variant.

Tracking by Reuters found that an average of 3,854 new infections were reported daily, representing 18% of the peak in cases last reported in mid-September. 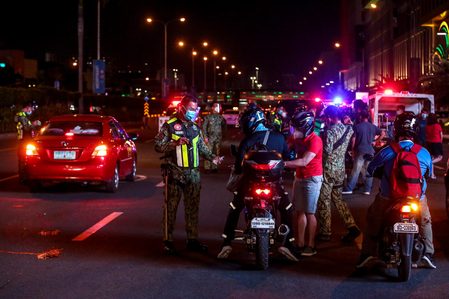 The number of deaths continued to increase after 186 new fatalities raised the death toll due to the disease to 43,586.

Meanwhile, the country saw a positivity rate of 5.6% out of 29,489 tests in its bulletin. These positive cases were added to the tally of confirmed cases only after further validation. This process helped ensure cases would not be recorded in duplicate, and that all test results had been submitted, explained the department.

After the record-breaking surge in infections fueled by the virulent Delta variant, the DOH recently said that the Philippines was now “low-risk” for COVID-19. But experts and researchers studying the pandemic temper their optimism with caution, saying the average number of daily cases still hovered in the thousands. This could be high enough to fuel a significant increase in cases if curbs are loosened too quickly.

On Wednesday, the Philippines also kicked off its nationwide rollout of COVID-19 vaccination among minors aged 12 to 17. Opening vaccinations to a new age group is expected to boost the country’s overall vaccine coverage, which still hovers at about 25% of the total population fully vaccinated. – Rappler.com