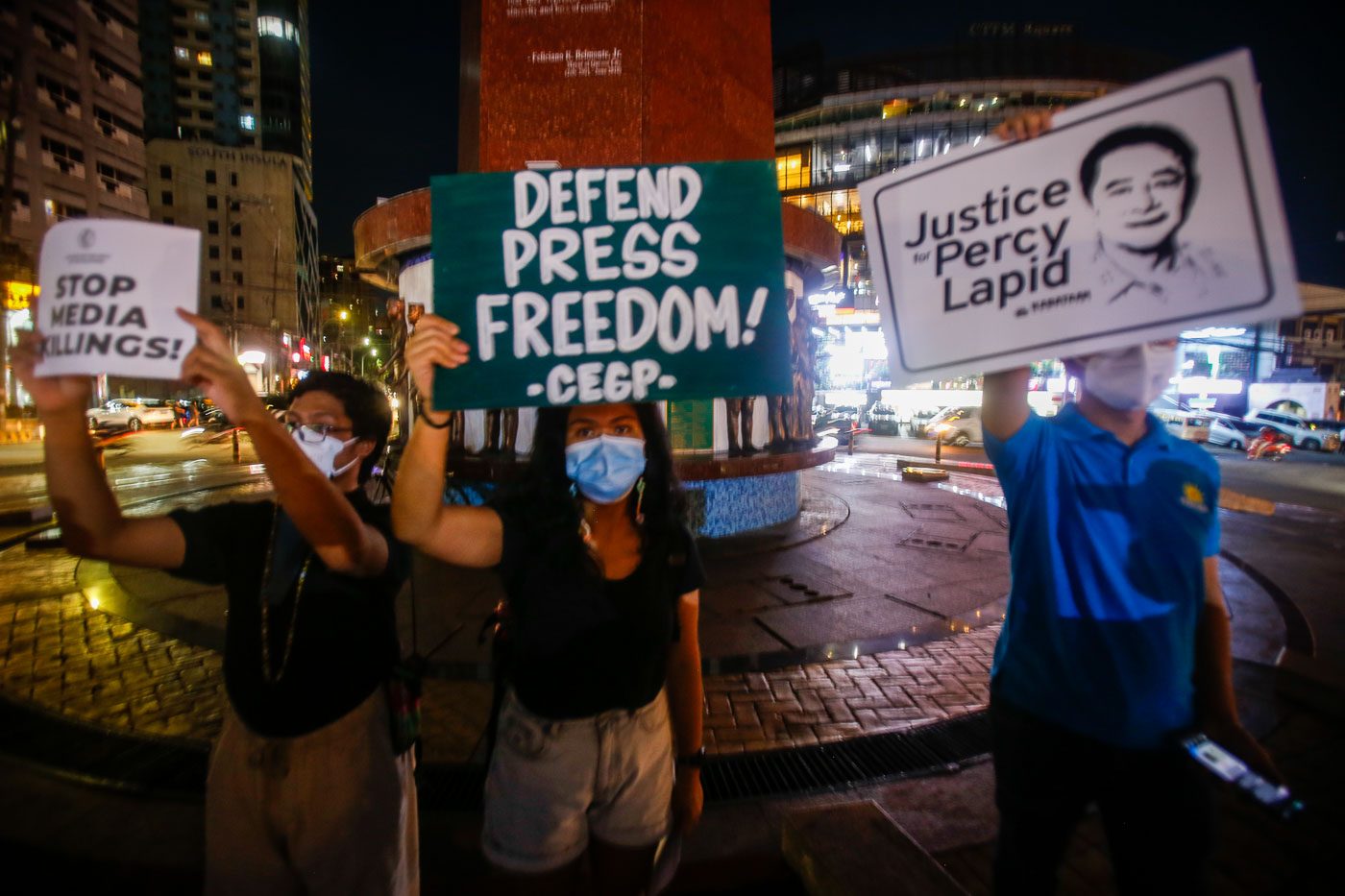 SEEKING JUSTICE. Various organizations led by the National Union of Journalists of the Philippines stage an indignation rally over the killing of radio commentator Percy Lapid, at the Boy Scout Circle in Quezon City on October 4, 2022.

MANILA, Philippines – Foreign governments around the world joined a growing chorus calling for accountability in the killing of radio broadcaster Percival Mabasa, popularly known as Percy Lapid, saying his death sparked “grave concern” over the safety of journalists in the Philippines.

Mabasa was shot dead inside his vehicle by unidentified assailants riding a motorcycle on Monday, October 3, in Las Piñas City. He is the second journalist in the Philippines to be killed under the Marcos administration, and the 197th since 1986.

“Journalist killings strike at the very core of media freedom and can create a chilling effect that curtails the ability of journalists to report news freely and safely,” read a joint statement issued by the embassies of Canada and the Netherlands.

Mabasa hosted a radio program called Lapid Fire on DWBL, where he delivered criticism against the administrations of President Ferdinand Marcos Jr. and Marcos’ predecessor Rodrigo Duterte. Videos of the program show Mabasa delving into topics such as Martial Law and the dangers of red-tagging.

Canada and the Netherlands, local co-chairs of the Media Freedom Coalition, called for a probe into Mabasa’s death and urged the Philippine government to take steps to ensure the safety of journalists.

“Such attacks on media workers must be urgently investigated, and those responsible must be held to account,” they said.

The French embassy in Manila on Tuesday afternoon backed the two countries’ joint statement as it added its voice to calls to protect press freedom in the Philippines.

“The embassy of France in the Philippines expresses its solidarity with the family of Mr. Mabasa. It supports the declaration by the Media Freedom Coalition co-chairs. France reaffirms its resolute, unwavering commitment to the freedom of the press, freedom of speech, and protection of journalists,” it said.

The European Union likewise said it supports the position taken by Canada and the Netherlands.

On Tuesday night, Denmark and the United Kingdom shared concern over Mabasa’s death.

“We urge the Filipino authorities to ensure that the perpetrators of the killing of Percival Mabasa are brought to justice and to create a safe environment for all journalists in the Philippines,” the UK embassy said in a statement.

Based on a tally by the National Union of Journalists of the Philippines, at least 99 media workers slain in the country were radio journalists like Mabasa.

Mabasa’s family called for justice, saying his death was a crime not only against his profession, but also the Philippines.

“His bold and sharp commentaries cut through the barrage of fake news over the airwaves and social media. We demand that his cowardly assassins be brought to justice,” they said. – Rappler.com