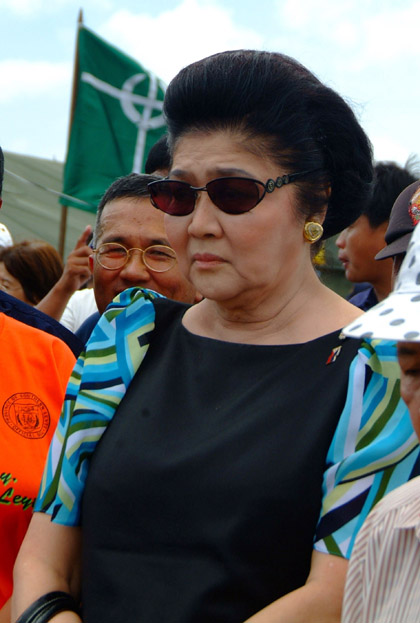 MANILA, Philippines - The Sandiganbayan's fifth division has slapped a garnishment order on the multi-million peso deposits of Ilocos Norte Rep Imelda Romualdez-Marcos at the Philippine Veterans Bank (PVB) to satisfy a P36-M judgment cost imposed on her late husband, former President Ferdinand Marcos, for siphoning funds from the National Food Authority (NFA) in 1983.

In a letter submitted to the graft court yesterday, PVB legal officer Rydely C. Valmores, confirmed that Mrs Marcos has an account with the bank’s main office servicing department (MOSD) branch. Valmores made the disclosure in compliance with the notice of garnishment dated June 20, 2012 sent by Sandiganbayan acting chief sheriff Albert A. Dela Cruz.

“In compliance with the said Notice of Garnishment, PVB-MOSD Branch was instructed to hold/freeze the account sufficient to cover the garnishment amount,” the bank officer said.

The freeze order arose from a Sandiganbayan decision on Sept 9, 2010 ordering Mrs Marcos to return to the government the P10-M NFA funds secretly transferred by her late husband to a private account on July 27, 1983.

In its ruling, the graft court held that former President Marcos pocketed P10-M that was withdrawn on his personal orders from the NFA’s account at the Philippine National Bank. According to the computations made by Sandiganbayan accountant Rodito C. Laggui Jr., interests on the P10-M for almost 29 years has amounted to P34-M.

Sheriff Dela Cruz said once the judgment cost has been fully satisfied, the Sandiganbayan would release custody over 3 real estate properties of the Marcos family in San Juan City that were earlier seized for possible public auction to raise the required amount.

These were residential lots with the biggest one measuring 1,584 square meters; a second one with an area of 864 sq.m. located on P. Gueverra corner Maude Streets; and a 932-sq.m. property situated on Claro M. Recto Street, all in San Juan City.

Dela Cruz said once the court has verified that there are enough funds in the PVB account to cover the judgment cost, the Sandiganbayan will lift garnishment on the other bank deposits of Mrs Marcos. - Rappler.com