CRIME SCENE. This is a screenshot of the Jolo, Sulu crime scene after the shooting incident. Screenshot from sourced video

The Jolo Regional Trial Court (RTC) has ordered the arrest of 9 former policemen involved in the killing of 4 Army intel operatives in Sulu, the Department of Justice (DOJ) announced on Friday, January 15.

Honey Delgado, spokesperson of the Office of the Prosecutor General, said the arrest warrants were issued on Thursday, January 14.

The court is set to hear the prosecution’s motion requesting a hold departure order, which would prevent the cops from leaving the country. 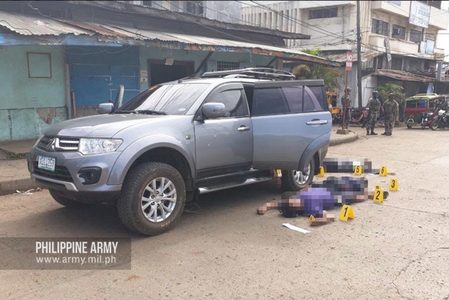 Ideally, the arrest warrants would lead to the detention of the 9 former policemen who have been charged with murder, a non-bailable offense.

Concerns about the former cops’ whereabouts were floated after the Philippine National Police (PNP) released them from its custody, following their dismissal from the police service.

In an interview with reporters on Friday, PNP spokesman Brigadier General Ildebrandi Usana called on the 9 policemen to surrender. – Rappler.com