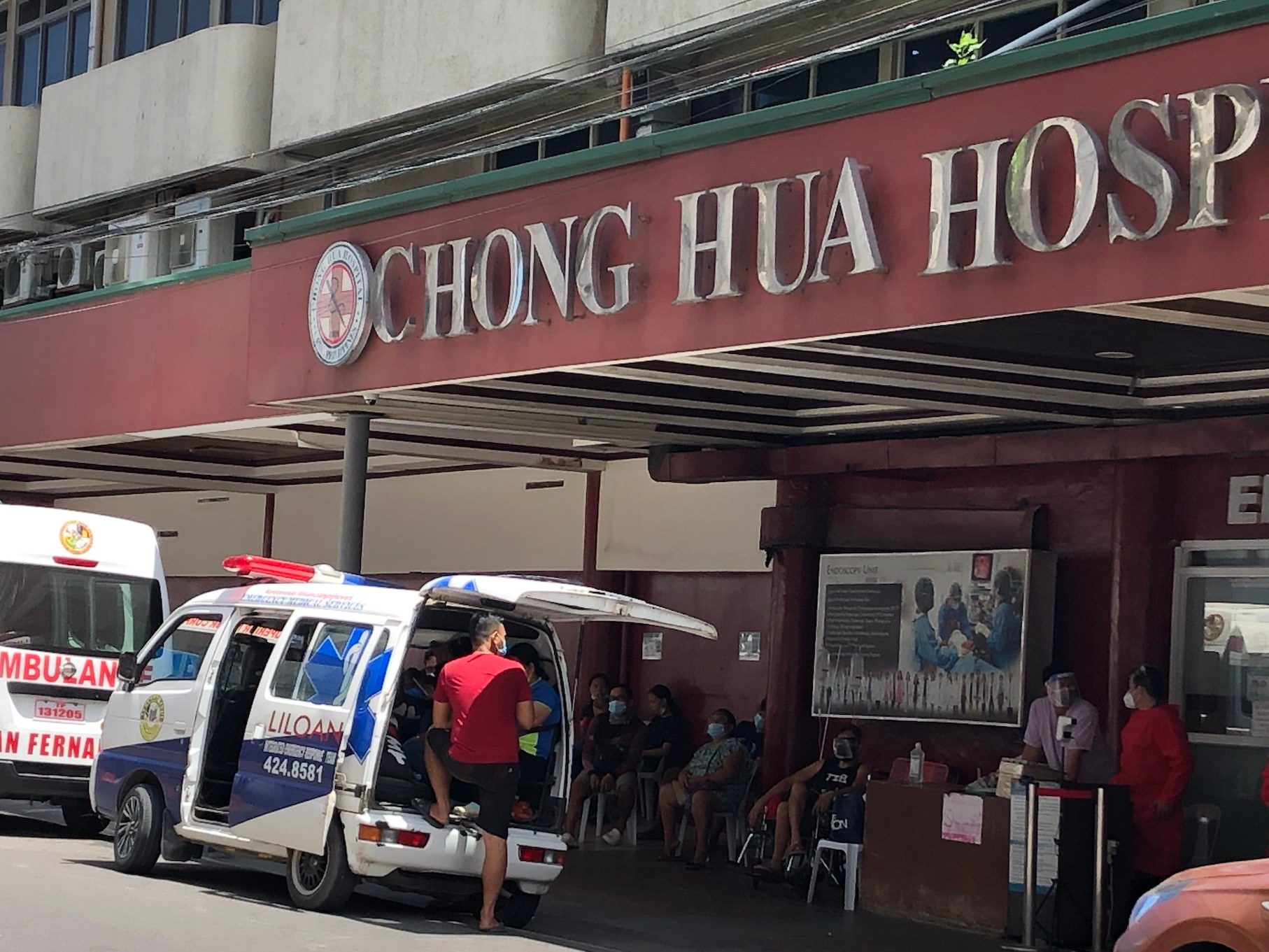 Patients fall in line to enter the emergency room of Chong Hua Hospital in Cebu City on Thursday, July 29.

The relaxed quarantine status, however, overlooked the rising number of fresh COVID-19 infections tallied by the city since the second week of July. As of Wednesday, July 28, the city’s active caseload climbed to 2,355, adding the 177 new coronavirus infections that day alone.

This is nearly triple the number of 842 recorded active cases in the city back in July 1.

In a virtual press conference on Thursday, July 29, city councilor Joel Garganera, head of the Cebu City Emergency Operations Center (EOC), said that 546 out of the total 927 critical care beds in the city were occupied.

This was across the 11 private hospitals and 4 public hospitals in Cebu City.

Reality on the ground

Rappler drove by Chong Hua Hospital in Cebu City, one of the major private hospitals here. Outside the emergency room was a queue of at least four ambulances on Thursday afternoon.

Garganera admitted that three major hospitals in the city have reached critical capacity, which meant that the facilities were almost running out of beds to accept patients.

(We have three major hospitals that are in critical stage. Completely full. One time, the ambulance [waiting] queue reached 24 hours.)

But he also said the line was due to the triage system implemented in the hospitals. Patients waiting their COVID-19 test results usually remain in ambulances.

Rappler talked to a resident doctor in one of the major private hospitals in the city. The doctor said, the current rise in cases was much higher than the post-holiday surge experienced last January to February.

(There are plenty more patients now. Actually, hospitals are full.)

The source worked for a hospital with about 50 COVID beds. The doctor said, all beds in their hospital were occupied. Those who wanted to be admitted were told to wait in the emergency room.

Sometimes, the queue for “pending” COVID admissions went past 10 patients.

(I know someone who wanted to get a room but could not because the ER was full. So, they were put under pending.)

(They were 19th in the queue. This is too much. Cases don’t seem to run out. They keep on coming and coming.)

Unlike the case surge in January when only two doctors were assigned to the COVID-19 ward, the source said this time, the number was raised to six doctors to accommodate influx of the patients.

Their colleagues from other hospitals in the city also said that they were at full capacity. Another resident doctor also told Rappler that at least in the hospital they worked at, there were more critical or severe cases of COVID-19 admissions compared to the milder cases admitted the past couple of months.

“More of annoyed na bitaw ko. Kay di siya mahuman. And then, katong January we thought that it’s dying down,” they said.

(I’m more annoyed at this point. It doesn’t seem like it’s going to end. In January, we thought that it was dying down.)

Through acting Mayor Michael Rama’s Executive Order No. 136, the city reimposed its liquor ban, and an earlier curfew from 10 pm to 5 am, along with other movement restrictions.

In the press conference, Garganera said that they already agreed with the Cebu provincial government to refer only severe cases of COVID-19 to Cebu City hospitals. Mild to moderate cases of COVID-19 should be sent to province’s district hospitals to avoid congestion in the major hospitals in Cebu City.

(For cases that aren’t so severe, our district hospitals are also efficient. In their referral, only severe cases should be assigned to us here. They have a huge vacancy.)

Out of the 546 occupied beds in the city, only 207 were Cebu City residents.

Garganera said help was on the way. He said the Department of Health committed to sending in more nurses to augment the lack of personnel in the city.

Meanwhile, health personnel in the city said they were tired. After a year of being at the frontlines, one of them told Rappler that they were mentally and physically drained.

(You can’t totally blame the patients because, who would want to get infected? It’s draining. Physically draining. Also, mentally. Because our duty hours are very tiring, very physically demanding.) – Rappler.com