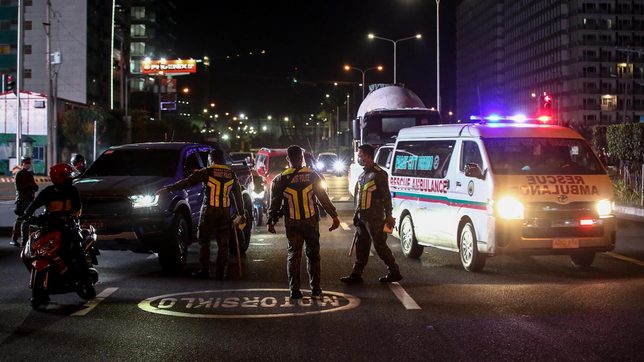 FILE PHOTO. Police officers in Pasay set up a checkpoint to strictly implement the region's uniform curfew hours on March 22. 2021.

Metro Manila mayors kicked off the implementation of a shortened curfew in the National Capital Region (NCR) on Wednesday, October 13.

That’s after the Metro Manila Council agreed to reduce the number of curfew hours from six to four. Beginning Wednesday, residents are prohibited to leave their homes from 12 am to 4 am.

Previously, the curfew in the region started at 10 pm.

“In light of the recent developments particularly the steady decrease of active cases, the curfew hours being presently implemented in the NCR under Alert Level 4 has to be adjusted,” Metropolitan Manila Development Authority Chairman Benhur Abalos said on Tuesday, October 12. He is the coordinator of the 17 mayors in the region.

As of Tuesday, the region was dealing with over 16,000 active COVID-19 cases.

Metro Manila is currently under general community quarantine (GCQ) with alert level 4, which meant that many business establishments are allowed to operate at a limited capacity.

The current classification in the region will expire on October 15. The interior department previously said the metropolis is ready for a downgrade in its alert level classification. – Rappler.com