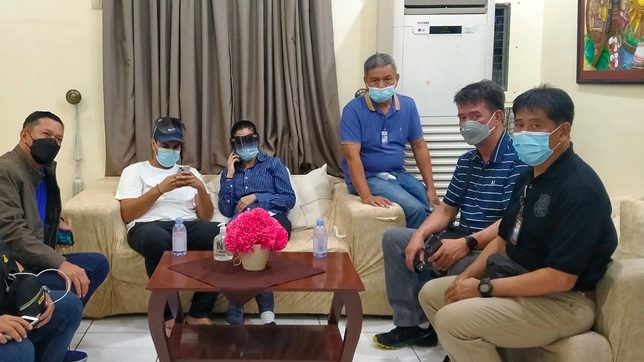 INTERCEPTED. The Dargani siblings (in blue long sleeves and white shirt) at the Senate premises in Pasay City after getting nabbed in Davao City on November 14, 2021.

Senator Risa Hontiveros once again raised questions on the actual income of detained Pharmally Pharmaceutical Corporation executives Mohit and Twinkle Dargani after obtaining records showing that the siblings had paid over P1.8 million for what was supposed to be their getaway flight out of the Philippines.

On Wednesday, November 24, Hontiveros showed reporters a copy of the a receipt from Seletar Jet Charter Singapore indicating that the Darganis paid $37,000 or around P1.87 million for a chartered flight that they were supposed to board in Davao City to fly to Kuala Lumpur, Malaysia, on November 14.

The Darganis were already aboard the private plane when Senate security personnel arrested them two weeks ago. Senators earlier cited the siblings in contempt and issued an arrest warrant for them due to their refusal to submit documents on Pharmally’s financial dealings.

Hontiveros flagged the amount of the private jet service, wondering how Mohit and Twinkle could have possibly paid for it themselves when their income tax records in 2020 showed they only paid P97,241 and P1,000, respectively.

This is despite Pharmally bagging around P10 billion worth of pandemic contracts from President Rodrigo Duterte’s government.

(Again, if only everyone can afford that. It’s like they just booked a P2-million flight on an app…. If the Darganis were able to pay that kind of amount, almost P2 million for a chartered flight, then it seems the income tax they had paid was not correct.)

The ongoing Senate blue ribbon committee probe into the anomalous government pandemic contracts with Pharmally is currently looking into whether the firms and their executives paid proper taxes to the government.

If the Darganis were not the ones who paid for the flight, Hontiveros said the person who did must be quite close to the siblings.

Hontiveros also found it suspicious that the Darganis wanted to stage their gateway from Davao City, the turf of Duterte who has so far shielded government officials and businessmen close to him who have been embroiled in the Pharmally scandal.

She then questioned why Bureau of Immigration (BI) officials even allowed the Darganis to board the private jet when there was already a lookout bulletin order against them.

The senator, who previously led a Senate investigation into the “pastillas” bribery scheme involving BI officials, then wondered if corrupt immigration officials aided the Darganis.

The Senate blue ribbon committee is set to continue its investigation on Friday, November 26, at 2 pm. – Rappler.com