PROCLAIMED. Vice president-elect Sara Duterte during her May 25 proclamation.

Facebook Twitter Copy URL
Copied
(1st UPDATE) The city plays host to a vice presidential inauguration for the first time, as another Davao mayor steps into the national scene 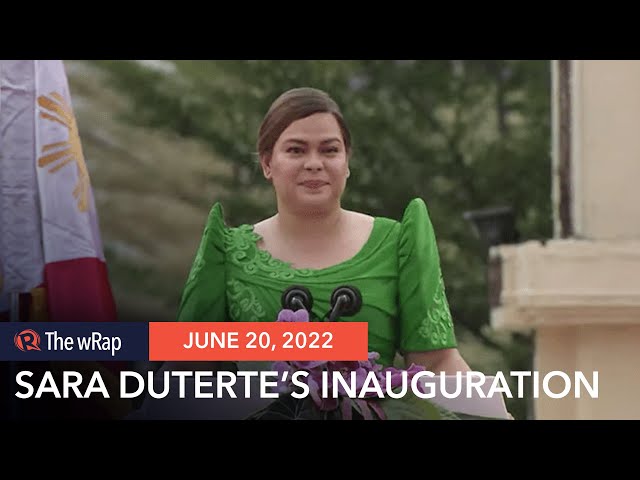 DAVAO CITY, Philippines – At the Bangkerohan public market, Nanette, a fruit vendor, was busy unloading a crate of mangosteens, which she would be selling for P50 a kilo.

Her face turned grim when she talked about how the incoming administration needs to make sure the prices of basic goods – especially fuel – go down. It’s ordinary people like her, she said, who feel the brunt of inflation after over two years of lockdown.

But she lit up when we finally talked about the big day ahead: Davao City Mayor Sara Duterte’s inauguration as 15th vice president of the Philippines on Sunday, June 19, almost two weeks before her term starts on June 30.

“[I feel] happy! Siya man jud ang amohang gusto nga mahimog vice president (She’s who we wanted to be vice president),” Nanette said. The sentiment is echoed in other parts of the city – glee over their mayor and their vice president finally taking her oath.

Bangkerohan is just a few blocks away from San Pedro Square, where Duterte, the vice president-elect, took her oath of office. While Nanette did not attend the event itself – she had fruits to sell and a stall to keep watch over – its significance certainly wasn’t lost on her. 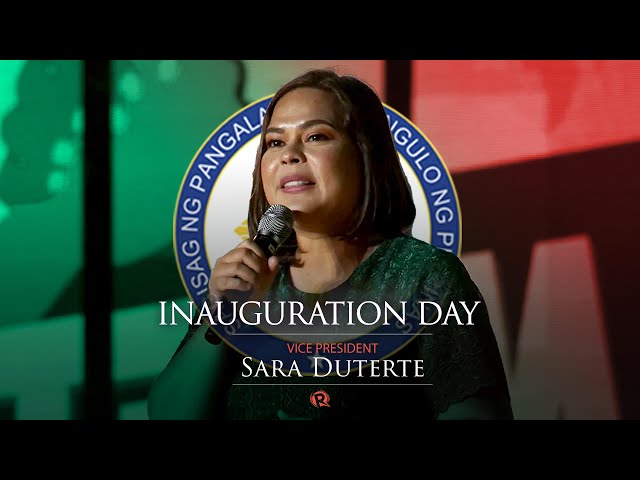 It was also the first inauguration of a president or vice president in Davao City – her father, former mayor and outgoing president Rodrigo Duterte, opted to take his oath inside Malacañang.

Sara’s inauguration took place at a stone’s throw away from key landmarks of Davao City – the city hall, where she’s served as mayor for a total of three terms; the legislative building; and the Davao Cathedral.

Preparations in the area were in full swing by Friday, June 17, with closures along most of San Pedro Street and parts of Bolton Street, where the crowd stayed. Duterte herself checked on the inauguration venue, taking a quick step out of city hall between meetings with diplomats and supporters.

After Mass at the San Pedro Cathedral on Sunday, it was time for Duterte’s inauguration. Her oath was administered by Supreme Court Associate Justice Ramon Paul Hernando, her former professor. She has also said that Hernando and his wife have been her “good friends for over 10 years.”

Duterte was beside her husband Manases Carpio all throughout the ceremony from the cathedral to San Pedro Square.

But the other two important men in the event – her father, President Duterte, and president-elect Ferdinand “Bongbong” Marcos Jr., only joined the ceremony proper at San Pedro Square.

The crowd cheered at the first glance of the father-and-daughter Duterte together in one frame, an image never seen in the campaign. Duterte was reportedly disappointed at his daughter’s decision to settle for vice president. Sara was always coy when asked about her relationship with her father during the campaign. Their rocky relationship was no secret.

But Sara hugged her father after taking her oath, once more to the delight of a cheering crowd.

In her speech, Sara gave an ode to fathers, without specific mentions of her father or her husband. Sunday was Father’s Day.

“Happy Father’s Day to all the fathers who make sure that another person is given the best of everything,” said the younger Duterte.

The vice president-elect centered her speech on securing a better future for children, saying that the challenges include “the trauma of broken families, the lifelong baggage because of irresponsible and bad parenting, [and] the abandonment issues due to an absentee parent.” Eyes were also on the older Duterte and his successor Marcos. Only Marcos’ sister Senator Imee Marcos was seen speaking to the outgoing president, who was supposedly miffed at the president-elect for making his daughter settle for the vice presidency. Duterte called Marcos a weak leader during the campaign and did not endorse him.

“The voice of 32.2 million Filipinos was loud and clear – with the message to serve our motherland. And this message has been reiterated in my oath: to consecrate myself to the service of the nation,” said Sara Duterte, who won the vice presidency by an even bigger margin than Marcos, who won with 31.6 million votes.

Sara said: “[I am] a proud Dabawenya. A proud Mindanawon. Hindi ako ang pinakamagaling, o pinakamatalinong tao sa Pilipinas at sa mundo, ngunit walang makakatalo sa tibay ng puso ko bilang isang Filipino (I am not the best, not the smartest person in the Philippines or in the world, but no one can beat the strength of my heart as a Filipino).”

Her mother, Elizabeth Zimmerman, held the Bible for the oath taking. The incoming vice president wore a custom Filipiniana by Silverio Anglacer, a Davao-based designer who’s created most of Sara’s formal wear, including the Filipiniana she wore when her father took his oath of office as president.

Duterte’s partner, Honeylet Avanceña, and their daughter Kitty, Sara’s half-sister, were not seen during the event.

While she’s neither the first Duterte in the national scene nor the first presidential child to win a vice presidential race, it’s the proximity of the two Dutertes’ electoral wins that make it novel.

But Sara is no stranger to stepping into spaces her father once occupied. When she won her first mayoral term in 2010, Sara and her father essentially switched places – Rodrigo Duterte had hit the consecutive term limit, so Sara, then the vice mayor, ran and won as mayor.

When the older Duterte ran for president in 2016, Sara filed her candidacy for mayor, taking over the post in city hall. With her exit after winning the 2022 vice presidential race, another Duterte will take over city hall: Sebastian, her younger brother.

In her 2022 campaign, Duterte honed in on three priorities: economic recovery after COVID-19 lockdowns, peace and security, and education. It’s the latter that’ll take up most of her time beginning June 30, when she also takes over as secretary of the Department of Education.

At the same time, she’s said that she plans to push through with an early campaign promise to open “satellite” offices under the Office of the Vice President (OVP) around the country. She’s yet to announce where those offices would be.

The two promises – an OVP that plans to replicate itself around the country and the education portfolio – are sure to keep Duterte busy for the next six years. They’ll also mean the potential of creating a wide network, which could come in handy should the 44-year-old have the presidency in mind. – with a report from Lian Buan/Rappler.com