Sen. Leila M. de Lima leaves the Manila Doctors Hospital this morning, Feb. 12, around 10:50 a.m., after a series of routinary medical exams which began yesterday. De Lima was escorted quickly back to the PNP Custodial Center by a convoy of police security. A week before her 4th year in unjust detention on Feb. 24, the Muntinlupa RTC, Branch 205, hearing 2 of the 3 trumped-up drug cases against her, is set to issue a Resolution on her filed Demurrers to Evidence to dismiss these cases.

Facebook Twitter Copy URL
Copied
(1st UPDATE) 'Even if she is allowed to go to the Naga hospital where her mom is, she still will not be allowed to see her face to face,' says De Lima's chief of staff 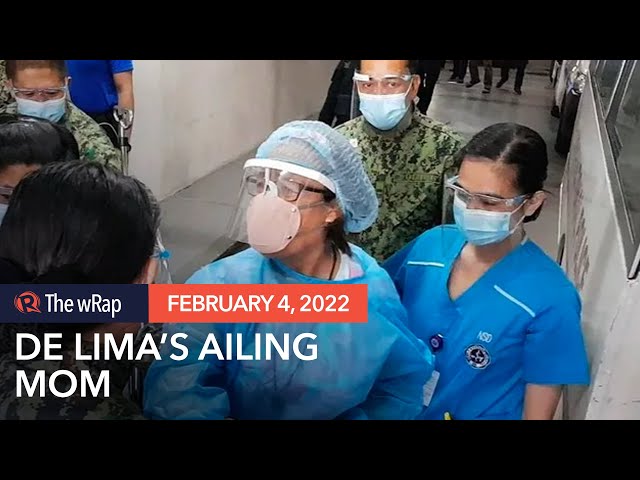 MANILA, Philippines – Jailed opposition Senator Leila De Lima settled for a video call with her ailing and COVID-19 positive mother, who is now in critical care in Naga City.

De Lima was granted authority by Muntinlupa courts Thursday, February 3, to be in a video call with 89-year-old mother Norma. The video call happened immediately after her lawyers secured the court order.

De Lima was once granted a two-day furlough to visit her mother in Iriga City in Camarines Sur, but this time, her mother testing positive for COVID-19 left her with not much option.

“Even if she is allowed to go to the Naga hospital where her mom is, she still will not be allowed to see her face to face. The goal is to enable Sen. Leila to see her mom while there is still time, which we are not sure how long given the seriousness of the situation,” said De Lima’s chief of staff Fhillip Sawali.

Norma De Lima tested positive in an RT-PCR test on January 10 and was hospitalized on January 22.

On February 1, “Mrs. De Lima’s vital signs, including her Pulse Rate and Oxygen Saturation levels, were observed to be in decline,” said the urgent motions submitted to the courts Thursday.

Norma De Lima was transferred on February 2 to a hospital in Naga City with an Intensive Care Unit (ICU).

De Lima’s mother had been suffering from ailments for some time.

“Sen. Leila appreciates the outpouring of support to her and her family, along with her supporters’ continued prayers for her mom’s speedy recovery,” said Sawali.

The senator thanked the court for allowing the video call.

“The video call lasted for less than an hour. I wasn’t really able to talk to Mommy because she was asleep during the duration of the call. There were occasional times when she opened her eyes for a few seconds, then pikit ulit (she closed her eyes again). But at least I was able to see her, and there was one or two instances that she recognized me,” De Lima said in a statement on Saturday, February 5.

“Of course, I would have wanted to be there with her taking care of her, but that’s not possible under the current situation. The moment may have been brief, but I am grateful to the Court for their prompt action in allowing me to see my mom and check on her condition, albeit through virtual means,” she added.

The alleged DDS, and the drug war deaths, were under investigation by the International Criminal Court until its deferral late last year. The deferral was a matter of procedure. – Rappler.com