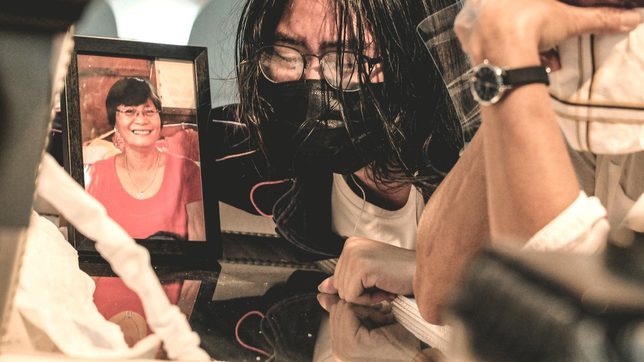 WEEP. Relatives and family mourn over the body of farmers group organizer Elena Tijamo at a funeral home in Cebu City on September 29, 2021.

Farmers’ rights advocate Elena Tijamo was buried in her hometown of Bantayan Island, Cebu Province on Saturday, October 2, over a year since her disappearance.

Despite her family and friends hoping for a safe recovery, Tijamo was found dead on August 30 at the VRP Medical Center in Mandaluyong City – hundreds of kilometers away from where she was abducted in Cebu.

However, Commissions on Human Rights (CHR)-Central Visayas chief investigator Leo Villarino said this does not conclude their work on Tijamo’s case. He added that her death now adds “more questions than answers” for CHR on the actual facts surrounding her disappearance.

Among these questions is the identity of a certain “Michael” who was said to have contacted Tijamo’s brother, who was then residing in Manila, regarding his sister’s confinement in the hospital.

(Our investigator in the Central Office is now trying to retrieve CCTV footage [of the hospital] to see if Michael’s entry into the facility had been captured.)

Villarino also told Rappler that the release of Tijamo’s cadaver was delayed even after it was positively identified by her daughter and brother, because it was registered under the name “Ava Perez Reyes” in the death certificate.

(One of our investigators tapped the PNP, and they brought along a fingerprint analyst.)

The fingerprint cross-matching examination was conducted by the Quezon City Police Crime Laboratory.

According to copies of the document obtained by Rappler, the result of the examination released on September 19 stated that Tijamo’s fingerprints matched that of the person registered as Reyes.

Among the specimens used for the fingerprint examination is a barangay clearance with Tijamo’s right thumb print, and her Social Security System ID which carries her left and right thumb print.

Rappler reached out to Tijamo’s family but they refused to release a statement as of writing.

Meanwhile, in a statement to media, the Farmers Development Center (FARDEC) said Tijamo’s return home is a “battle for justice.” The non-government organization demanded an expedited and impartial investigation on her case.

“Elena’s return is a battle for justice and a quick but fair investigation on the circumstances surrounding her abduction and death. We call for law enforcement bodies to act thoroughly on the matter,” said Marianne Tagalo, FARDEC officer-in-charge.

Tijamo was a program coordinator for FARDEC –  an organization that gives legal aid and agriculture education to farmers. FARDEC, along with 18 organizations, was red-tagged by the Armed Forces of the Philippines and the Department of National Defense in a congressional briefing in November 2019.

According to statements from her family, she was forcibly taken from her home in Bantayan Island on June 13, 2020 by unidentified men said to be carrying firearms. Bantayan Island is a northern island in Cebu Province, four hours away from Cebu City. – Rappler.com