Photo from National Task Force on the West Philippine Sea

Facebook Twitter Copy URL
Copied
'We must show the world and especially China that we are [a] country that will fight for our rights,' says former Philippine foreign secretary Albert Del Rosario

Del Rosario said the large number of Chinese vessels that continued to dwell in Philippine waters showed that the challenge in dealing with China’s aggression in the area “remains in need of a solution.” 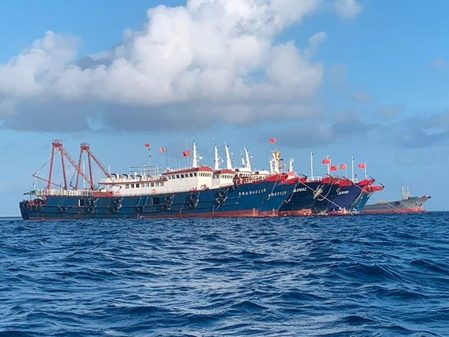 The Philippines has repeatedly demanded China to withdraw its vessels in the West Philippine Sea, including over 200 vessels that massed near Julian Felipe Reef in early March. But China had refused to do so, insisting the ships were “fishing vessels” taking shelter from “rough sea conditions.”

Del Rosario said on Wednesday that joint patrols with the US should be considered, as the Philippines and US had earlier agreed on this. The Philippines’ former top diplomat said that he, along with other officials, had traveled to Washington DC, where they spoke with then-Deputy Secretary of State Anthony Blinken on the matter.

Blinken is now the US Secretary of State.

“An agreement on joint patrols with the US was approved but this was shelved by the administration of President (Rodrigo) Duterte, fearing that China would be displeased,” Del Rosario said.

Del Rosario continued, “However, China’s duplicity and invasion of our waters remain unabated despite the efforts of President Duterte to appease China.”

“We must show the world and especially China that we are [a] country that will fight for our rights and able to enforce our laws in our own EEZ,” he added, referring to the Philippines’ exclusive economic zone.

Duterte had first mentioned his intention to stop joint maritime patrols in the West Philippine Sea in 2016, even after the Philippines won its landmark case against China that had ruled in favor of the Philippines’ legal claim over the area.

Last August 2020, Defense Secretary Delfin Lorenzana reiterated that the President had this standing order that the military “should not involve ourselves in naval exercises in the South China Sea, except our national waters, the 12-mile distance from our shores.”

Before Duterte ordered the ban, joint maritime patrols with the US were done in the West Philippine Sea in April 2016.

China’s recent actions in the West Philippine Sea have prompted blowback from the international community, with Europe, Japan, Australia, Canada, and the US expressing concerns over flared tensions in the South China Sea.

The US had earlier backed the Philippines’ concerns over the presence of Chinese maritime militia, vowing to stand by its oldest ally in Asia. – Rappler.com