Mar 22, 2021 5:21 PM PHT
Sofia Tomacruz
Facebook Twitter Copy URL
Copied
The Philippines should 'ask why we should not consider this Chinese action at Julian Felipe Reef to be an act of unilateral aggression,' says former foreign secretary Albert del Rosario

Former Philippine foreign secretary Albert del Rosario called on the Duterte government to consider summoning Chinese Ambassador to the Philippines Huang Xilian, after some 220 ships believed to be manned by Chinese maritime militia were spotted near a reef in the West Philippine Sea.

Del Rosario made the statement on Monday, March 22, a day after the Philippines lodged a protest against China over the incident.

The former foreign secretary commended the government for its “proactive” stand in reporting, condemning, and later protesting China’s actions in the maritime area, but said Huang should explain the massing of the hundreds of Chinese vessels near Julian Felipe Reef – a maritime feature west of Palawan and within the Philippines exclusive economic zone.

“Given the gravity of this development, we should consider summoning the Chinese Ambassador in the Philippines to ask why we should not consider this Chinese action at Julian Felipe Reef to be an act of unilateral aggression against the territorial integrity of our country,” Del Rosario said.

The National Task Force for the West Philippine Sea (NTF-WPS) first reported on the presence of Chinese ships near Juan Felipe Reef.

The task force said it received verified reports from the Philippine Coast Guard that the ships, moored in line formation, appeared to show no signs of “actual fishing activities,” and had been spotted with lights turned on at night despite clear weather.

The report prompted NTF-WPS chief Hermogenes Esperon Jr to recommend the filing of a diplomatic protest, which had been done by Philippine Foreign Secretary Teodoro Locsin Jr on Sunday night, March 21. 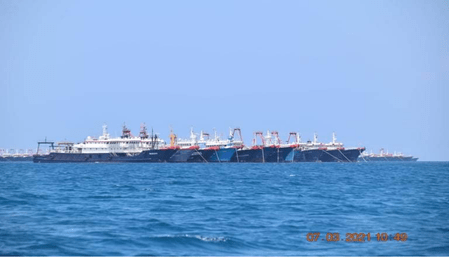 Del Rosario commended this, saying, “It is the sworn duty of our leaders and officials to defend what is ours and therefore be proactive against incursions on our sovereign rights.”

Julian Felipe reef is about 175 nautical miles west of Bataraza, Palawan, also putting it within the exclusive economic zone of the Philippines, where Filipinos enjoy sovereign rights over resources.

In response to the incident, Del Rosario also urged the government to consult with the Philippines’ security partners in the United States, Europe, the United Kingdom, Australia, and Japan on how to address China’s continuing aggressive behavior in the South China Sea, including the West Philippine Sea.

“This recent Chinese action fits the pattern of blatant bullying being done by the Chinese leadership over decades against its neighbors in the South China Sea,” he said. – Rappler.com