People crowd the opening of the portion of Manila bay near US Embassy along Roxas boulevard in Manila which is covered by artificial white sand from crushed dolomite on September 19, 2020, as various government agencies led by Department of Environment and Natural Resources spearheaded the event to mark the International Coastal Cleanup Day. 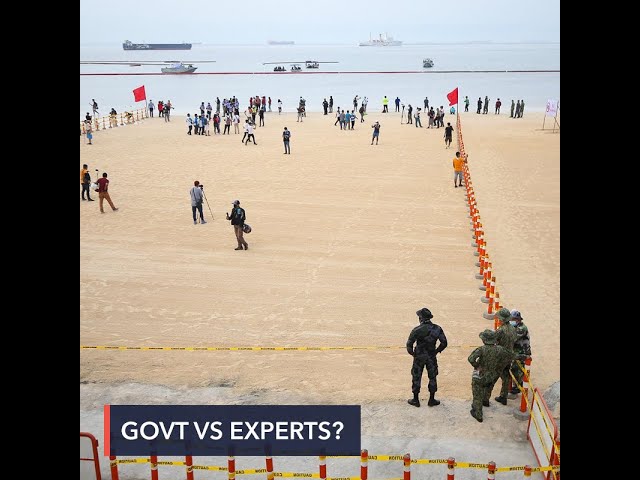 A Department of Environment and Natural Resources (DENR) official on Wednesday, October 14, slammed experts from the University of the Philippines (UP) for criticizing the controversial Manila Bay white sand project and offering to help the government rehabilitate the area.

In a Laging Handa press briefing on Wednesday, Environment Undersecretary Benny Antiporda claimed that the experts’ offer to create a more science-based rehabilitation program for Manila Bay will cost the government more money. (READ: Fast facts: What is dolomite sand, and how will it affect Manila Bay?)

Antiporda defended the project from scientists, saying they have no right to criticize.

“Hindi ‘nyo karapatang batikusin ito dahil bayaran kayo. ‘Yun lang po ang masasabi ko sa UP. Uulit-ulitin ko: Bayaran kayo.” (You have no right to criticize this project because you were paid. That’s all I can say to UP. I will repeat: You were paid.)

“I would like to start my statement with an apology to the UP as a whole. It is not intended to destroy the good name of the university itself but this is just to send the message to UP MSI that we’re partners here,” Antiporda said Thursday on Headstart.

Antiporda said he was carried away by his emotions because the UP experts’ criticism was “painful.”

When asked by anchor Karen Davila if she accepts Antiporda’s apology, David responded in a mix of English and Filipino: “Definitely, there’s no bad blood between DENR and UP. From the very start I knew this was just a misunderstanding and miscommunication.”

The tension between the DENR and UP experts has simmered for weeks.

On October 5, the UP Institute of Biology released a statement critical of the project. The state biologists suggested “nature-based solutions” that take into account short-term and long-term effects on species and ecosystem. Rehabilitating mangroves, for example, is a more cost-effective solution than dumping dolomite, they said.

Earlier, the UP MSI also outlined the major problems in Manila Bay, as well as the steps forward to properly rehabilitate the area.

For Antiporda, experts from the state university should not be paid for research work in coordination with government projects.

(Why are you charging the government? After your education was funded by taxpayers’ money, after you became state scholars, you want to suck the blood of the people with all the funds that you got? Now that we are doing something good, we have to pay to have consultations with you?)

Aside from their criticism on the dolomite, Antiporda’s remarks against the UP experts also stemmed from the “half a billion pesos” that the DENR had supposedly paid the experts over various consultations since 2016.

(They had been paid half a billion pesos from 2016 until this year. Half a billion, and that’s only for consultations. No infrastructure. UP, from what I know, should offer its services for free.)

Laura David, director of the UP MSI, clarified that the DENR did not spend P500 million in their projects with the institute.

The said budget was used for 10 projects conducted over the past 10 years in collaboration with the DENR, including a cosponsorship support for a symposium. David welcomed any government audit on the UP MSI’s projects.

David clarified that the institute does not have access to funds for additional research, and most of their funds actually come from clients.

When the UP MSI does projects with government agencies such as the DENR, David said the funds are used to support “scientific research and investigation, from the use of laboratories and research equipment and facilities, to field work, to support for research assistants.”

Meanwhile, UP Institute of Biology director Ian Fontanilla explained that one of their proposed solutions, mangrove rehabilitation, is actually intended for the whole Manila Bay, not just for the area where the dolomite was dumped.

Fontanilla also clarified that their collaborations with the DENR for the last 10 years amounted to at least P53.7 million, on projects that “focused on the Philippine Eagle, wildlife forensics, and the ongoing project of setting up the Protected Area Gallery at the DENR compound.”

Fontanilla also stated that their projects are always open to an audit. – Rappler.com