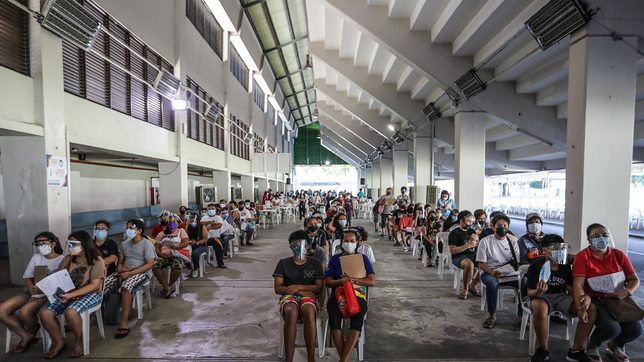 VACCINE DRIVE. Minors accompanied by their parent or guardian are vaccinated with the Pfizer COVID-19 vaccine at the Marikina Sports Center in Marikina City on November 3, 2021.

The Department of Health (DOH) expressed openness to requiring COVID-19 vaccination for specific high-risk sectors as the government seeks to cover at least 90% of the country’s population, but said it would be treated as a “last resort.”

Health Undersecretary Maria Rosario Vergeire told reporters on Friday, November 5, that the proposal is being discussed by the government’s coronavirus task force and that a law would first need to be passed to implement it.

“We will never achieve the immunity we need as a population if there are sectors in our society that do not want to get vaccinated. So one of the approaches we’re looking at [to address this] is to make it mandatory,” Vergeire said in a mix of English and Filipino.

She added: “Definitely if we are going to have this mandated, it would be for specific sectors only. DOH will also support this so we can achieve population protection.”

The health department’s statement is a marked turnaround from its earlier position where it was firmly against mandatory COVID-19 vaccination. In April, after some lawmakers in the House of Representatives filed a bill to make vaccination mandatory, the agency said it stood by experts’ recommendation to keep the public vaccine drive “purely voluntary.”

At the time, Vergeire said that while people had the “moral obligation” to get vaccinated, the government could not require it since vaccines have yet to receive full regulatory approval.

“We adhere to the principle that the benefits outweigh the risks, and that’s why we are offering it to the population. But it will be their right to decide if they will receive this or not, based on how we explain this (COVID-19 vaccination) to them,” she said in April.

The percentage of fully vaccinated Filipinos is at around 26% of the population, eight months since the vaccine rollout began in March.

The government wants to double that figure before 2021 ends, targeting 50% of the population by December. It later wants to see 70% vaccinated by the May 2022 elections, and eventually 90%.

A recent public survey done by the Social Weather Stations found that while 6 out of 10 adult Filipinos said they were willing to get vaccinated against COVID-19, a sizable portion of the population remains reluctant or still unwilling to get a shot. – Rappler.com