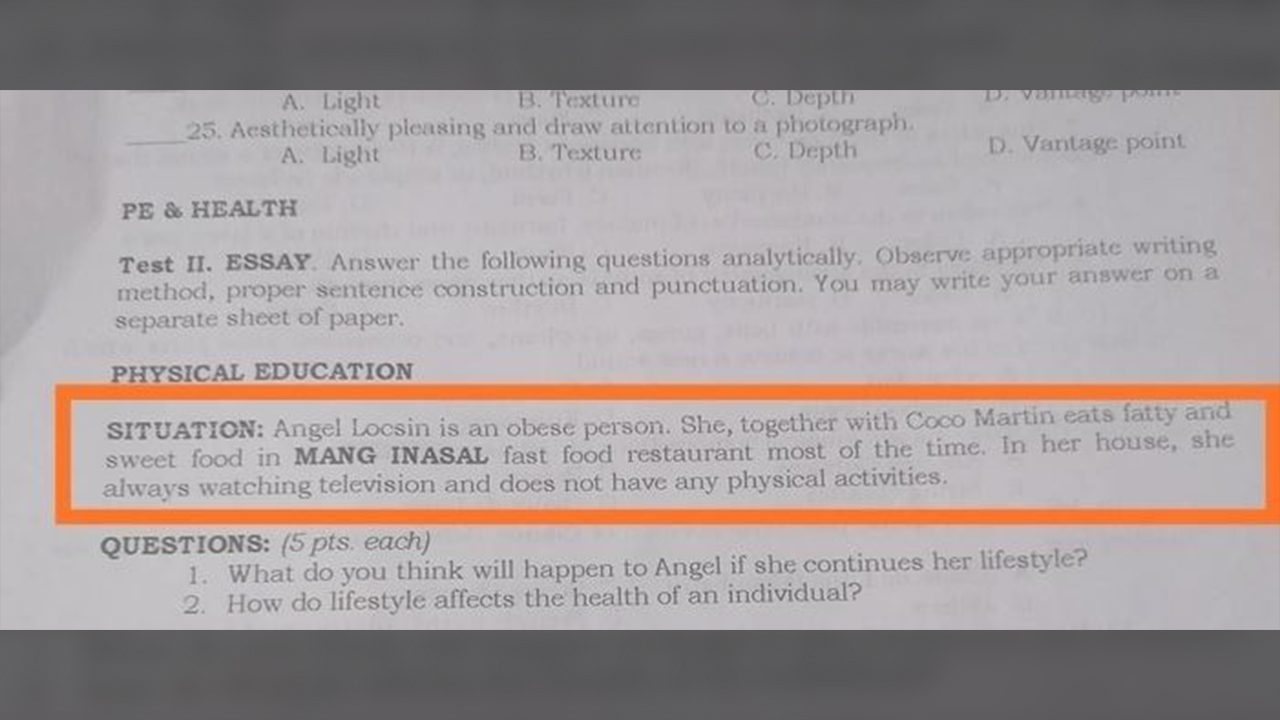 'BODY-SHAMED.' Actress Angel Locsin is called an 'obese person' by a MAPEH module from DepEd-Occidental Mindoro.

The Department of Education (DepEd) apologized for yet another controversial module for distance learning on Friday, November 13. This time, it was a physical education worksheet that called actress Angel Locsin an “obese person.”

Around the second week of November, photos of a music, arts, physical education, and health (MAPEH) module from DepEd-Occidental Mindoro made rounds on social media. It prompted students with the following situation:

“Angel Locsin is an obese person. She, together with Coco Martin eats fatty and sweet food in Mang Inasal fast food restaurant most of the time. In her house, she always watching television (sic) and does not have any physical activities.”

The module asks students what would happen to Locsin if she “continues her lifestyle.”

“Upon initial investigation, this office found out that the said material is not contained in the self-learning module (SLM) developed and quality assured by the DepEd Central Office. The said material is a teacher-made assessment for a Grade 10 MAPEH class purposely to measure specific competencies of the learning area,” DepEd-Occidental Mindoro said in an official statement.

The statement, released on Friday evening, November 13, said that assessment of the learning materials is the “primordial responsibility of the teacher.”

Ideally, the DepEd Central Office is meant to conduct quality assurance (QA) of all learning materials. But when the school year began via a remote learning system on October 5, QA had yet to be completed, and so schools were entrusted to do the assessment themselves.

“We would like to express our sincerest apology to the concerned individuals which may have been offended or harmed by this incident. The Department of Education does not tolerate nor condone any act of body shaming, ad hominem, or any similar act of bullying both in the physical and virtual environments,” the statement read.

The schools division said they communicated with the male teacher concerned. They affirmed their commitment to “provide quality education to all learners.”

The incident involving the actress is the latest in a string of mishaps in educational modules from the DepEd. In other instances, citizens have spotted grammar mistakes in English questions, and wrong solutions in math problems. There were also modules that reinforced gender stereotypes. Locsin, while often making headlines because of her active work in the coronavirus crisis, has trended because of her weight. She has kept mum on being inadvertently crowned the internet’s new body positivity champion. – Rappler.com