Briones on ‘MaJoHa’: Learning crisis inherited from past administrations 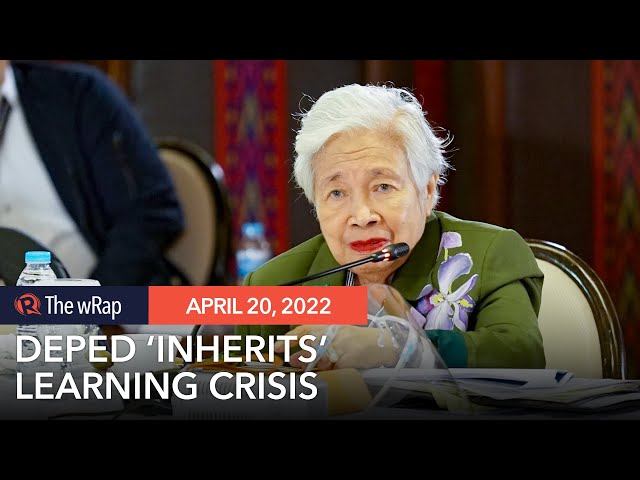 MANILA, Philippines – Education Secretary Leonor Briones said the current administration should not be blamed for the supposed learning crisis recently exposed by some teenage TV contestants’ lack of knowledge of basic historical facts.

At a press briefing on Tuesday, April 19, the Department of Education (DepEd) chief was asked for her reaction to the now viral video clip, and she stressed that problems such as this were merely passed on to them by previous administrations.

In a clip from the reality show Pinoy Big Brother that has gone viral, teen contestants were asked, among other questions, for the popular collective name of the priests who were were executed during the Spanish rule: Mariano Gomez, Jose Burgos, and Jacinto Zamora.

The “housemates” answered “MaJo,” then “MaJoHa.” The correct answer was “GomBurZa.”

The priests were executed by garrote by Spanish colonial authorities on charges of subversion arising from the 1872 Cavite mutiny.

Briones said the DepEd only “faithfully” implemented the curriculum that was passed on to them, noting that the problems of the education sector also emanated from the previous administrations.

“I’m just saying that, if you count the years, the years where the learners have been under our direct tutelage, probably would be at the most Grade 4 or 6. I’d just like to point that out. Because we say that education is in crisis, therefore this admin is to blame,” Briones said.

“We tend to forget that education policy is a result of policies under the leadership made before,” she added.

In the same briefing, Education Undersecretary Anne Sevilla said that trivia questions asked during that contest should not be used to gauge a student’s intelligence. She noted that the questions were formed with “entertainment” as one of the objectives.

Sevilla said the education approach in the country had shifted to promote critical thinking instead of mere memorization.

(The questions who, what, and when, we call them memorization…. For our students now, we teach them not the what, who, and when. We ask them the how’s and the why’s.)

Rappler asked a followup question: “But shouldn’t the students know first the basics of who, what, or when of these [events] before they deal with the how’s and why’s?”

(My answer to that, Bonz, is I don’t know. They are not our students during the basic education phase. But it’s also right that we are being asked for solutions for the problems that were passed on to us.)

Briones was referring to the TV show’s “housemates” who were aged 15 to 17 years. She said these teenagers were a product of the basic education curriculum under the previous administration.

The viral clip from Pinoy Big Brother has sparked calls for the government to bring back history classes to high school programs in the country. These were removed through a DepEd order in 2014, under Aquino administration. Under DepEd Order 20, s. 2014, Philippine History was removed from the core curriculum of instruction of Araling Panlipunan (Social Studies) in the junior high school and senior high school.

In 2021, several groups and even Vice President Leni Robredo called on the government to declare a “learning crisis” in the Philippines following a World Bank report on poor learning results among Filipino students. (READ: DepEd head demands apology from World Bank for PH poor education ranking)

Education advocates have said that the pandemic highlighted the gaps in the Philippine education system. This has been evident in some erroneous learning modules distributed to public school students during the pandemic.

What critics described as “painful” grammatical errors, wrong math equations, and depictions of gender stereotypes further alarmed a public already worried over the quality of education that over 25 million students were getting during the pandemic. – Rappler.com