DepEd scraps bidding for P4.2-M worth of Christmas ‘ham and cheese’ 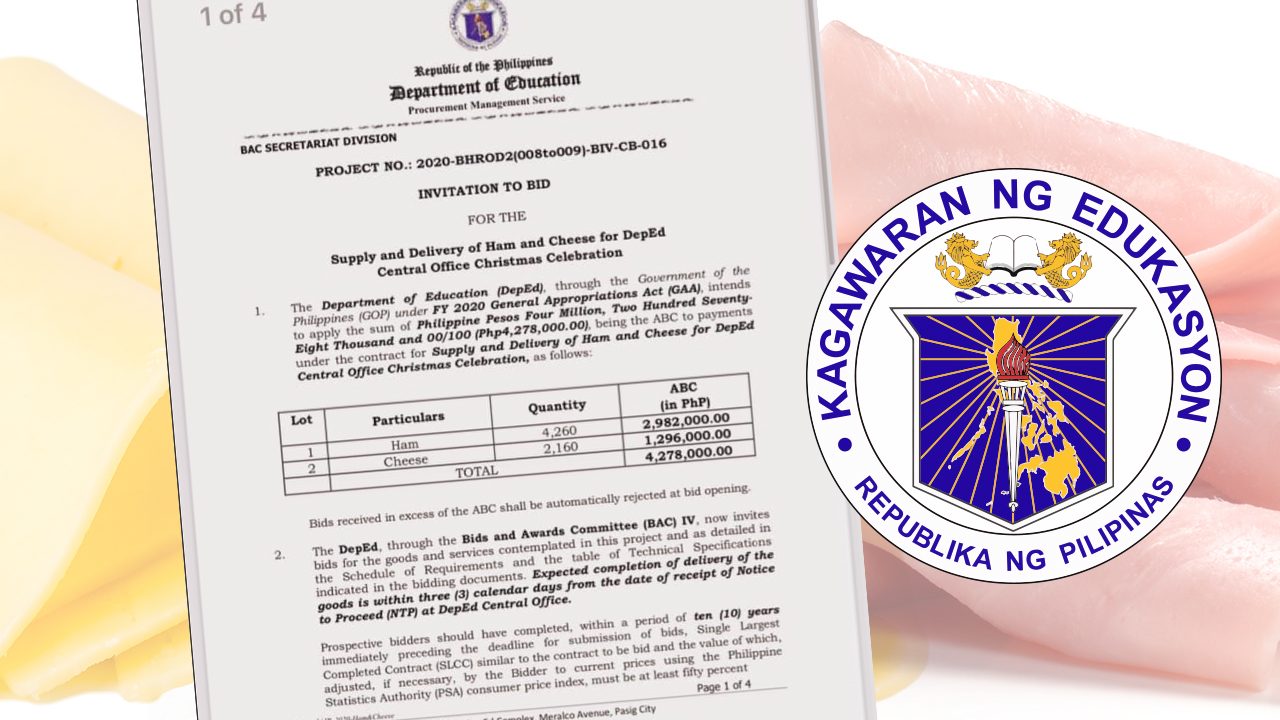 The Department of Education (DepEd) said Saturday, November 14, that it cancelled the bidding of over P4.2 million “for the supply and delivery of ham and cheese for the DepEd Central Office Christmas celebration.”

“It was [a] regular procurement but it is inappropriate at this time when our employees are severely affected by recent disasters. We have since reallocated the funds for the needs of those affected by typhoons Rolly and Ulysses and the ongoing COVID-19 effort for our employees,” Education Undersecretary Revsee Escobedo said in a statement.

“Other regional and division offices not affected by the typhoons have also pitched in to help our teachers and learners on the ground,” Escobedo added.

The cancellation was made following the viral Facebook post of newspaper columnist Tonyo Cruz, containing DepEd’s ‘invitation to bid.’ In his post, Cruz said that DepEd was supposed to buy 4,260 pieces of ham and 2,160 pieces of cheese, amounting to P4.278 million.

In the comments to Cruz’s post, Filipinos online questioned the priorities of the agency given that the country was still reeling for the consecutive onslaughts of Super Typhoon Rolly (Goni) and Typhoon Ulysses (Vamco).

Super Typhoon Rolly, which came in early November, brought damage to at least 226 schools. Still unrecovered from the hammering of Rolly, Luzon on November 11, bore the brunt of yet another storm – Typhoon Ulysses.

In defense, DepEd Director June Gudoy said that the supposed purchase of ham and cheese was appropriated in the agency’s 2019 budget.

The call for bid has been taken down from the DepEd website.

In a statement on Saturday, the Teachers’ Dignity Coalition (TDC) said they were pleased with the DepEd decision to cancel the biding. However, the group said that “the initial decision, was indeed unnecessary and insensitive.”

“This shows [how] DepEd sets priorities and violates its own rules.”

Citing DepEd Order No. 114 s. 2009, TDC said that Christmas celebration in the agency “should be simple but meaningful and in fact encourages the field to divert the funds or savings to donations for communities affected by disasters.”

This development also happened at a time when the agency was struggling to fund the production of self-learning modules (SLM) for its distance learning system.

After Rolly’s onslaught, Education Secretary Leonor Briones gave assurances that the production of SLMs would not be affected though some schools reported that their modules were damaged.

Briones advised schools to solve on their own the problem of damaged learning modules caused by the typhoon by drying these under the sun, or using a flat iron.

In October, the DepEd also faced another backlash over its purchase of 254 units of Mitsubishi Strada, saying this was “DepEd’s own kind of Dolomite scam.” – Rappler.com