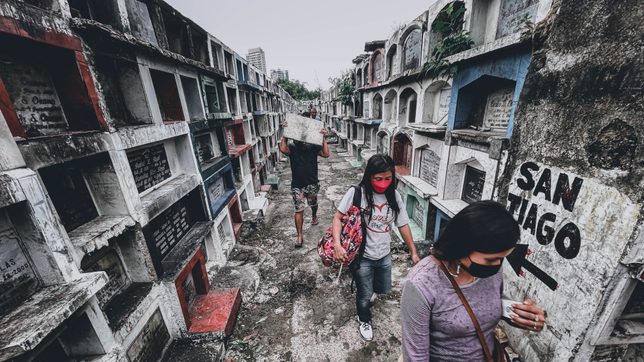 Family members start to clean up the graves of their departed loved at the Carreta Cemetery in Cebu City, in preparation for the Kalag-kalag season or All Saints’ Day and All Souls’ Day on November 1 and 2.

Facebook Twitter Copy URL
Copied
'We wish the national government should see the light and DILG, likewise. We seek for their respect, and we seek for their understanding,' says acting Cebu City Mayor Michael Rama

Acting Mayor Michael Rama said in a press conference on Wednesday, October 20, that Cebu City will keep cemeteries open even after Interior Secretary Eduardo Año issued an order that these areas be closed from October 29 to November 2.

The objective of the DILG closure order was to prevent the usual overcrowding in cemeteries when Filipinos commemorate All Souls and All Saints Days.

“We wish the national government should see the light and DILG (Department of Interior and Local Government), likewise. We seek for their respect, and we seek for their understanding,” said Rama.

Rama said that they have prepared for the upcoming Undas with various local government departments and that it would be best for the national government to respect local autonomy.

Kalag-kalag is the Cebuano equivalent of All Souls’ Day and All Saints’ Day or Undas.

The acting mayor also clarified that during November 1 and 2, only fully vaccinated individuals will be allowed entry into the cemeteries.

“We have a setup and we will continue to review this setup and every day is an assessment,” said Rama, who announced a possible Friday inspection of cemeteries together with police officials and the city’s emergency operations center.

This is not the first time that a local Cebuano official defied the national government’s protocols. In June, Cebu governor Gwendolyn Garcia defied IATF on OFW quarantine protocols but later deferred to national protocols after being called out by President Rodrigo Duterte.

On Tuesday, October 19, the national government placed Cebu City, along with Lapu-Lapu City, Mandaue City, and Cebu province under the alert level system from October 20 to 31.

Cebu City has been placed under Alert Level 2.

Rama said LGU officials would discuss the new classification and the possibilities of another directive.

“Ang pinakaimportante karon (What’s the most important thing now) is—as we have said—vaccination is the way to liberation but sustainability and maintenance, prevention should continuously be implemented,” he added.