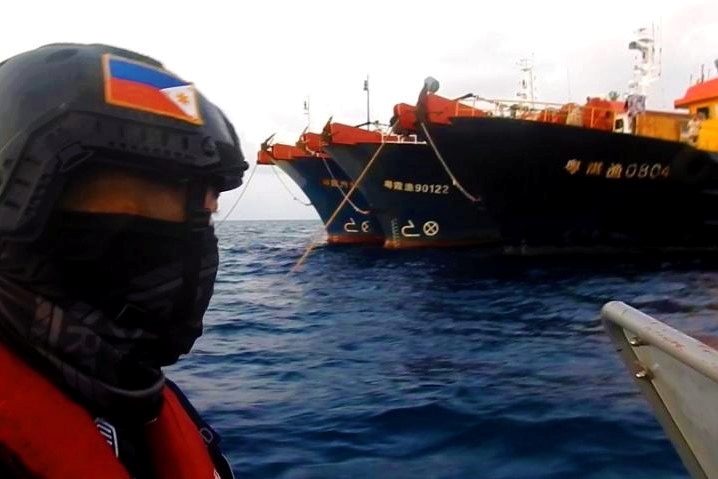 PH WATERS. A Philippine Coast Guard personnel surveys near Chinese vessels believed to be manned by Chinese maritime militia personnel at Julian Felipe Reed (Whitsun Reef) in a handout photo distributed by the Philippine Coast guard April 15 and taken according to the source either on April 13 or 14.

Foreign Secretary Teodoro Locsin Jr ordered the filing of another diplomatic protest against China on Thursday, May 13, following reports that hundreds of Chinese maritime militia vessels were still scattered across different maritime features in the West Philippine Sea.

Since April 5, the Philippines has likewise filed daily diplomatic protests against China over the illegal presence of its ships in Julian Felipe Reef, despite repeated and regular demands from defense officials and diplomats to withdraw. In a series of tweets on Thursday, Locsin hit the NTF-WPS for supposedly disregarding protocol by releasing a public statement on the presence of China’s ships in the West Philippine Sea before informing the DFA of the matter.

“First NTF-WPS will explain to me why it made a press release and did not inform the DFA first so the only news today would be DFA FIRES DIPLOMATIC PROTEST OVER PRESENCE OF 287 CHINESE VESSELS. SHET,” he said.

Unlike in previous years, the NTF-WPS has been vocal over Chinese activities in the West Philippine Sea, often saying in press releases that information shared with the public has been reported to the appropriate national agencies for possible diplomatic actions.

Locsin said such protocol means that “When press released first it states the fact of alien presence in Philippine territory construable as possession – once again – until a diplomatic protest is filed.”

The DFA chief indicated his preference to have news of a lodged diplomatic protest come out first to inform the public of both China’s moves to assert its claims, and the Philippines’ move to assert its rights in the area.

Locsin said he took the matter up with President Rodrigo Duterte in Davao City.

Experts earlier warned the swarming of China’s vessels in the South China Sea, including the West Philippine Sea, was part of its strategy to assert control over the seascape and push other countries’ vessels out of its waters. – Rappler.com