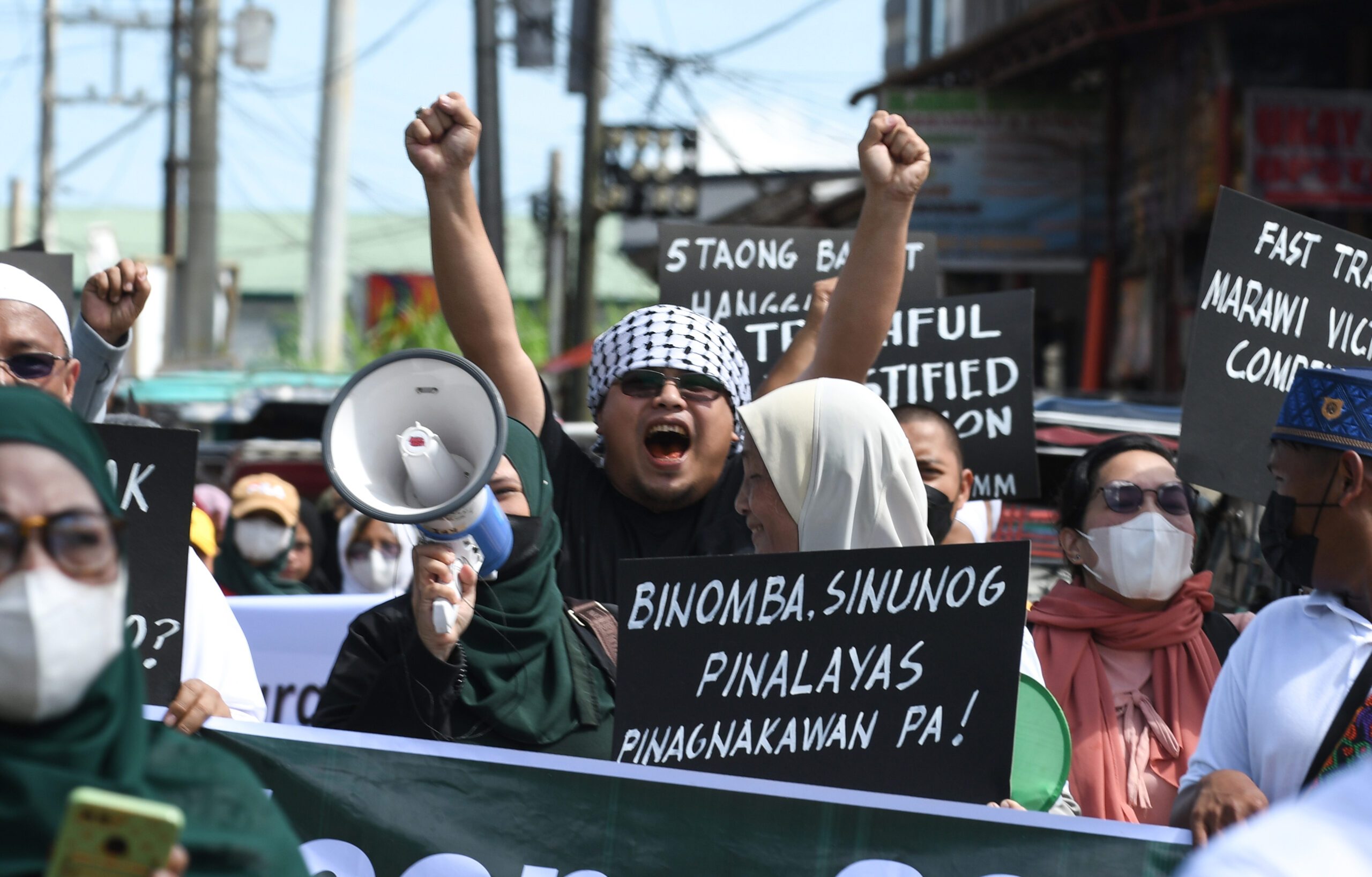 DEMAND. Displaced Marawi residents demand to be allowed to return to their villages and rebuild, during a rally on Monday, May 23, exactly five years after the Marawi Siege.

Facebook Twitter Copy URL
Copied
Hundreds of mostly internally displaced persons stage a rally to mark the 5th year of the Marawi siege. They have been living in temporary shelters since they were forced to flee their homes on May 23, 2017.

MARAWI CITY, Philippines – Displaced Marawi residents have given up on the Duterte administration and called on presumptive president Ferdinand “Bongbong” Marcos Jr. to give them priority as soon as he assumes office.

They staged a rally in Marawi on Monday, May 23, and appealed to Marcos to “clean up the mess” in the rehabilitation of the predominantly Muslim city so they could return to their homes by year-end.

More than 500 mostly internally displaced persons (IDPs) living in temporary shelters that dotted the outskirts of Marawi staged the rally, to mark the fifth year since they were displaced by the months of intense street fighting between government forces and pro-ISIS Maute militants who seized the city in 2017.

Students joined the rally and staged a street play to dramatize their grievances.

Amenodin “Ding” Cali, director of the Reclaiming Marawi Movement (RMM), said many IDPs were already fed up because their pleas to be allowed to return were not heeded by the government.

“The IDPs are fed up with the unreliable livelihood they have in the temporary shelters. They have had enough of it. They want to go home to rebuild their homes,” Cali said.

Aisha Radia, a mother of 10, broke into tears as she narrated how she and her family continued to suffer five years after the fighting drove them away from their homes.

“Until when do we remain to be a bakwit (IDP)? We did not wish this thing to happen. We left our homes without money or clothes,” Radia told demonstrators.

She said she and her family spent the early months at the Lumbacatoros Saguiaran shelter, begging for food and money.

Radia said she would not hesitate to join her fellow IDPs if they organize more mass actions unless the incoming Marcos administration acts on their problem.

Cali said the IDPs have taken a wait-and-see stance on how the next president would handle the Marawi crisis, and who he would appoint to the Marawi Compensation Board.

President Rodrigo Duterte signed the Marawi Siege Compensation Act of 2022 in April, which provided for the creation of the compensation board.

The board is to be composed of a chairperson and eight members that would have quasi-judicial functions to resolve disputes and receive claims.

In March, Marcos had said in response to questions that there would be “no need” to focus on rehabilitating Marawi areas ravaged by war because Duterte was already “finishing it.”

The United Nations High Commissioner for Refugees (UNHCR) said in its May 2020 report that more than 120,000 people live in permanent and temporary shelters outside Marawi City.

Castro said more than 1,000 residents have been given permits to rebuild their homes in the so-called Most Affected Area (MAA) in Marawi City.

He said they were even encouraging IDPs to secure the permits to rebuild their homes from the Office of the Building Official (OBO) in Marawi City.

“Many are waiting for the money that they could get from the Marawi Compensation Board,” Castro said.

He said the board has yet to decide how to compensate people for their business losses, and for their homes that were destroyed in the five months of fighting and bombardments.

The TFBM, tasked by Duterte to rebuild the city, has presented a new sports stadium, a convention center, and newly reconstructed mosques and parks as part of the reconstruction efforts days before the May 23 commemoration of the Marawi Siege.

Tirmizy Abdullah, the national coordinator of the Interfaith Cooperation Forum, frowned on these projects, saying these were not what the displaced Maranaos needed at this time. (READ: ‘A big injustice’: Maranao leaders protest Marawi stadium, convention center projects)

Abdullah said the newly completed infrastructure projects were nothing without residents returning to their homes. – Rappler.com