Alert Level 2 for Metro Manila not a sudden decision – DOH 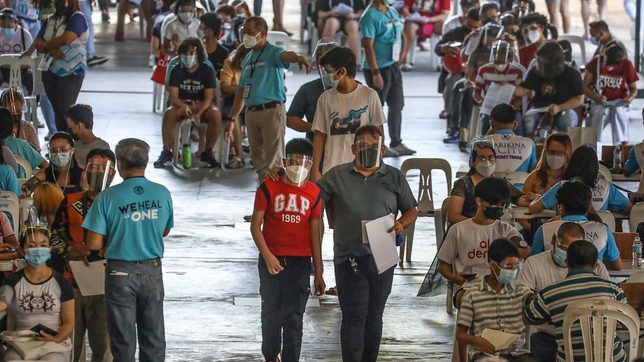 VACCINE DRIVE. In this file photo, minors accompanied by their parents or guardians are vaccinated with the Pfizer COVID-19 vaccine at the Marikina Sports Complex during the rollout of the Pediatric COVID-19 Vaccination in Marikina City on November 3, 2021.

Vergeire made the statement at the weekly Laging Handa briefing amid some observations that the capital region’s shift to the less strict rules was too sudden.

Malacañang had announced the deescalation of the capital region’s alert status on Thursday, barely a week after they announced that it would remain under Alert Level 3. The shift to Alert Level 2 began on Friday.

(So it’s not that it was sudden. We were still able to monitor the situation in Metro Manila or NCR. There was just a shift in the timeline for our declaration of Alert Level 2 in NCR.)

The move was based on different metrics, she said, including the decrease in NCR’s healthcare utilization, hospital bed occupancy, two-week growth rate, and average daily attack rate. NCR is now considered low-risk, she said, which was the reason for deescalation.

Vergeire said that if the country would maintais its current mobility rate, compliance with minimum public health standards, and keep the number of days between detection to isolation at five days or less, then the country can look forward to having around 22,000 active cases by November 15. The total number of active cases as of November 5 is 37,377.

An increase in mobility, however, would mean that the number of active cases may stay the same until the end of 2021.

Earlier during the briefing, Philippine National Police Chief Lieutenant General Guillermo Eleazar said that the first day of Alert Level 2 led to an increase in people out and about, due to the increase in open establishments and seating and venue capacity.

The PNP observed that there were slightly less health protocol violators on November 5, compared to the average daily number of violators from October 16 to November 4, when NCR was under Alert Level 3.

Metro Manila will be under Alert Level 2 until until November 21.

“This is a truly positive news for our struggling economy considering that the region contributes more than 30% of the gross domestic product.  Even more meaningfully, it will help restore jobs and incomes to our countrymen and enable them and their families to enjoy the Christmas Season,” FINEX president Francis Lim said in a statement on Saturday.

Lim urged the government to step up its vaccination drive, and for Filipinos to get vaccinated, so they may enjoy the benefits for the fully-vaccinated under Alert Level 2.

Socioeconomic Planning Secretary Karl Chua earlier said that the Philippines is poised to gain P3.6 billion more and generate 16,000 jobs per week, should the National Capital Region be lowered to Alert Level 2. – Rappler.com