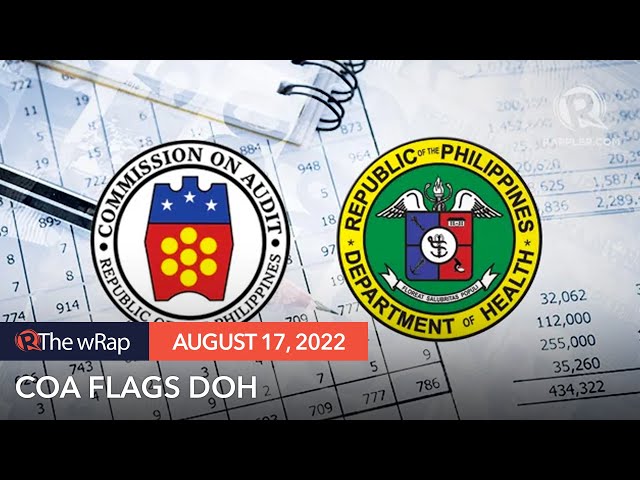 MANILA, Philippines – The Commission on Audit (COA) flagged the Department of Health (DOH) over its P166.21 million worth of pandemic purchases for ending up with wrong offices and persons they were not intended for.

Editor’s Note: An earlier version of this story erroneously reported that the amount involved is P166.21 billion. This has been corrected.

The purchases were procured in 2020 and 2021 by the Procurement Service of the Department of Budget and Management (PS-DBM) using DOH funds.

This was contained in the 2021 audit report on the DOH released by the state auditors on Monday, August 15.

State auditors also said that another batch of purchases amounting to P18.56 million simply disappeared, their whereabouts unknown even if the Property Transfer Reports (PTRs) showed there was proper delivery and acceptance. However, a separate report showed that supplies arrived a little bit lighter than otherwise indicated in the Distribution Lists (DLs).

State auditors recommended that the secretary of health require the DOH’s head of supply and chain management to submit proof that the purchases amounting to P185.603 million ended up where they were supposed to.

State auditors sent out 163 confirmation letters to various DOH units and other government agencies to verify the delivery of pandemic purchases procured by the PS-DBM. Of these, only 67 responded.

Records showed P166.21 million worth of supplies and medical equipment were intended for delivery to Cagayan Valley – Center for Health Development (CHD), the Southern Isabela Medical Center (SIMC), and the Ninoy Aquino Stadium COVID Site at the Rizal Memorial Sports Complex in Manila. However, none of them received any of the items.

“The confirmation replies pertaining to three recipient-agencies disclosed that the items were delivered to offices/regions other than (the ones) indicated in the DL,” COA said.

State auditors also said that a third of the deliveries landed with the Office of Civil Defense (OCD). They noted that the final destination of the balance of items worth P108.61 million went to unidentified persons and offices.

“Items totaling P54,180,412 were received instead by the OCD, while a total of P108,609,640 were received by individuals whose office/agencies could not be identified,” COA said.

For instance, some 150,000 surgical masks worth P3.42 million that was intended for Northern Mindanao CHD turned up at the Caraga CHD.

“The confirmation replies pertaining to the six recipient-agencies showed that the COVID-19 items were not received by them,” COA noted.

COA also said there were shortages amounting to at least P835,402 for the deliveries received by Metro Manila CHD and Caraga CHD.

The DOH said the OCD was asked to submit an explanation since the discrepancies were “observed during deliveries in which the latter was in charge.” It added that the OCD gave assurances that deliveries of medical supplies, personal protective equipment, and other related materials were successfully made. – Rappler.com