Facebook Twitter Copy URL
Copied
The DOH announcement comes a day after Health Undersecretary Maria Rosario Vergeire said in a television interview on Monday, January 24, that the Philippines had not detected any case of the stealth Omicron 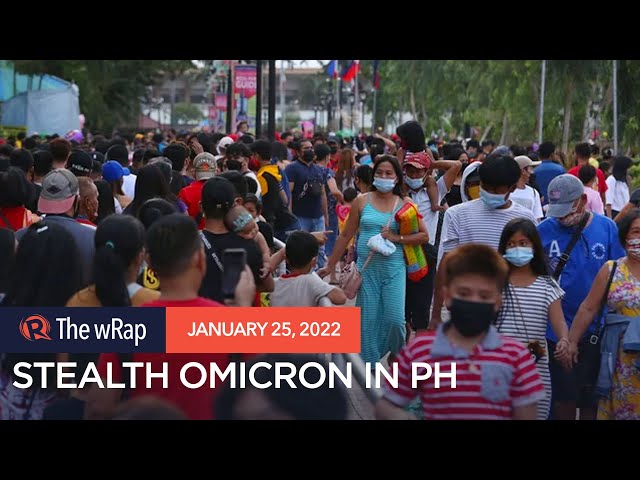 MANILA, Philippines – The Department of Health (DOH) said on Tuesday, January 25, that Omicron subvariant BA.2 or stealth Omicron has been detected in the country and common among local cases of the Omicron variant.

In a press briefing on Tuesday, Health Undersecretary Maria Rosario Vergeire said that stealth Omicron is “predominant in most regions” in the country.

Citing the Philippine Genome Center (PGC) analysis, Vergeire also said that Omicron subvariant BA.1 has been detected in eight regions and is predominant in the Bicol Region and among returning overseas Filipinos. BA.1 is also the predominant subvariant detected across the world.

The DOH announcement comes a day after Vergeire said in a television interview on Monday, January 24, that the Philippines had not detected any case of the stealth Omicron, as she gave assurances that PGC has the capability to detect “all possible lineages that are present in every sample” through genome sequencing.

The Philippines now has 535 cases of Omicron. The DOH has yet to give specific details how many of these are from the BA.1 or BA.2 sublineages.

Philippine health officials have stressed that stealth Omicron is no different from the original Omicron variant (BA.1).

(There’s no significant difference in terms of clinical presentation between BA.1 and BA.2, and this still needs further studies because there’s only limited observation regarding this subvariant.)

The UK Health Security Agency has classified the Omircon subvariant as “variant of investigation” after preliminary studies showed that it might be both more transmissible and could evade vaccines better than other variants of the novel coronavirus.

According to the World Health Organization, the Omicron variant has three subvariants: BA.1, BA.2, and BA.3. While the BA.1 variant is dominant among the Omicron cases reported across the world, the BA.2 subvariant is causing alarm in some European countries.

Researchers have said that BA.1 has a mutation that shows up on PCR (polymerase chain reaction) tests, making the detection of Omicron easy. Meanwhile, BA.2 does not have the same mutation, making it difficult to detect.

UK scientists said that it was too early to know whether the Omicron subvariant would spread in the same way as the original Omicron.

However, in Denmark, the stealth Omicron accounted for 20% of all cases in the last week of 2021, increasing to approximately 45% in the second week of 2022. During the same period, the relative frequency of BA.1 had dropped. This was according to Statens Serum Institut, an agency under the Danish Ministry of Health tasked with ensuring “preparedness against infectious diseases and biological threats as well as control of congenital disorders.”

Learn more about the Omicron subvariant BA.2 below.