DOH: ‘Too early’ to say ECQ slowed down coronavirus spread 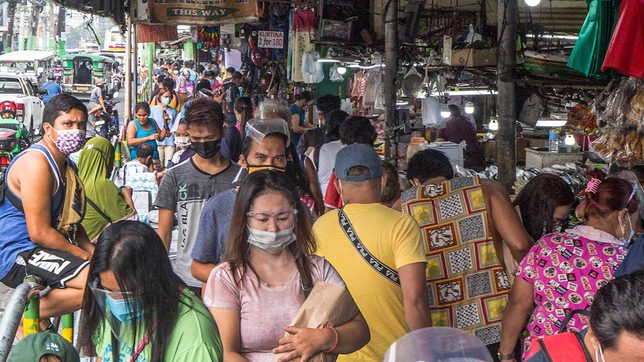 OUT AND ABOUT. A busy sidewalk at a business area in Novaliches, Quezon City, on March 19, 2021.

Facebook Twitter Copy URL
Copied
(UPDATED) Health Undersecretary Maria Rosario Vergeire says on Monday, April 5, that the effects of the strict lockdown may be seen in about two weeks

The Department of Health (DOH) said on Monday, April 5, that it is “too early” to say that the enforcement of enhanced community quarantine (ECQ) in virus epicenter Metro Manila slowed down COVID-19 transmission in the capital region.

In a press briefing on Monday morning, Health Undersecretary Maria Rosario Vergeire said the “artificial” downward trend in cases should not be interpreted as an effect of the strict lockdown.

“We can’t see the effects of the ECQ for now. In about two weeks, we may see the effects. When the surge in cases happened in July to August last year, it took us 10 days from the time we ended the ECQ to see a decline in cases,” she said in a mix of English and Filipino.

Vergeire made the statement when asked about the DOH analysis of the pandemic situation as the Octa Research team said the “increasing trend” in Metro Manila cases has slowed down.

In its report published on Monday, Octa Research cited the decline in the capital region’s reproduction number (R) – the number of people that one COVID-19 positive case can infect – from 1.88 to 1.61 (March 29 to April 4).

Vergeire said the country should expect a relatively low number of reported cases in the coming days as some testing centers did not operate during the Holy Week.

She cautioned the public against interpreting the anticipated lower case tally as a slow down in the spread of COVID-19.

“We have anticipated that for these coming days, medyo mababa ang itatala naming (we will be tallying lower) numbers because some of the laboratories did not operate,” Vergeire said.

(Let us not think that transmission is slowing down with this artificial drop in cases. We won’t be seeing the effects of this ECQ until about two weeks from the time we end the ECQ.)

Vergeire likewise appealed to testing centers to refrain from slowing down operations if possible, as aggressive testing was needed to assess the pandemic situation in the country.

“And this would really affect the numbers that we would report in the next days,” Vergeire added.

Last Wednesday, March 31, the DOH appealed to licensed COVID-19 testing centers to continue their operations during Holy Week to ensure the uninterrupted monitoring of the pandemic situation.

In terms of hospital care utilization, the DOH said the public would see the effects of the ECQ in Metro Manila, Bulacan, Rizal, Laguna, and Cavite around 3 to 4 weeks after the lockdown implementation.

Relatives of COVID-19 patients have been turning to social media for help with finding available hospitals for admission, with some of them narrating how their loved ones have died without proper treatment due to full capacity in hospitals.

The COVID-19 pandemic has left over 13,400 people dead in the country. – with reports from Sofia Tomacruz/Rappler.com