DOJ junks all cases related to death of Christine Dacera MOTHER. Sharon Dacera is emotional as she appeals to authorities for the swift justice on the alleged rape-slay of her daughter Christine Angelica during a short press conference in San Juan City on Tuesday, January 5, 2021. 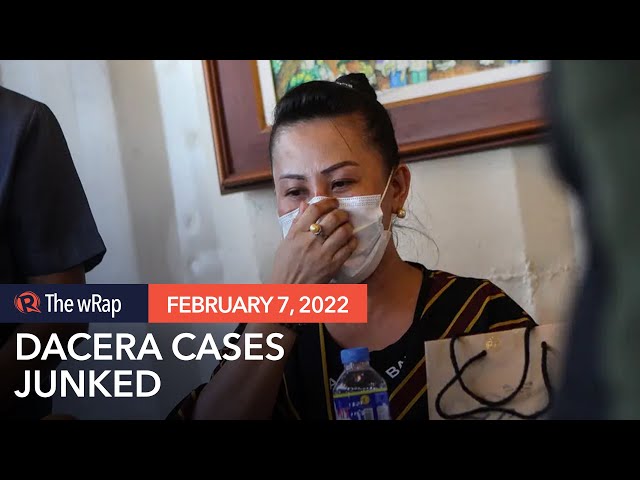 MANILA, Philippines – Prosecutors in Makati have junked the slew of complaints filed by parties against each other over the death of 23-year-old flight attendant Christine Dacera. The young flight attendant was found unconscious at a hotel bath tub after New Year’s eve party gone wrong.

The Department of Justice (DOJ) announced in a press briefer Monday, February 7, the dismissal of complaints of drug violations, perjury, obstruction of justice, falsification and libel filed against each other by Dacera’s mother Sharon and her party companions.

“The cases mentioned in the briefer are the only cases involving Christine Dacera,” said DOJ Spokesperson Undersecretary Emmeline Villar.

Makati police bungled the early investigation, accusing Dacera’s companions of raping the flight attendant and announcing their manhunt. The companions immediately cleared their name, saying they are gay who helped bring Dacera to the hospital after finding her unconscious in the tub. Rape complaints were earlier dismissed.

In its latest resolution, the Office of the City Prosecutor (OCP) of Makati City junked complaints of administering illegal drugs and attempt to deliver illegal drugs against Mark Anthony Rosales and Rommel D. Galido.

Apart from the fact that there was no physical proof of the alleged drugs, “there was no proof or evidence that could establish the alleged administration of any illegal drug into the body of Christine Dacera,” said the DOJ.

“The fact that the drug test on Dacera yielded negative result for presence of dangerous drugs, coupled by her urine sample examination results (showing that she was negative for Methamphetamine and Amphetamine), supported the findings of dismissal,” the DOJ added.

“There was no proof that said respondents were recklessly imprudent in failing to bring immediate medical attention to Dacera and that the same caused her death. Evidence suggested that respondents performed CPR immediately upon noticing Dacera’s perilous state and sought help from the hotel lobby,” the DOJ said.

“OCP Makati City also decided to dismiss the complaint for Intriguing Against Honor, as well as that of Malicious Prosecution. The filing of various criminal complaints against complainants is not intriguing against honor as it was based on the pieces of evidence gathered during the investigation of the case. The mere act of submitting a case to the authorities, on one hand, is not tantamount to the crime of malicious prosecution,” said the DOJ. – Rappler.com