Aug 5, 2020 3:42 PM PHT
Lian Buan
Facebook Twitter Copy URL
Copied
At the heart of the discussion is whether the Philippines would be violating international commitments against execution 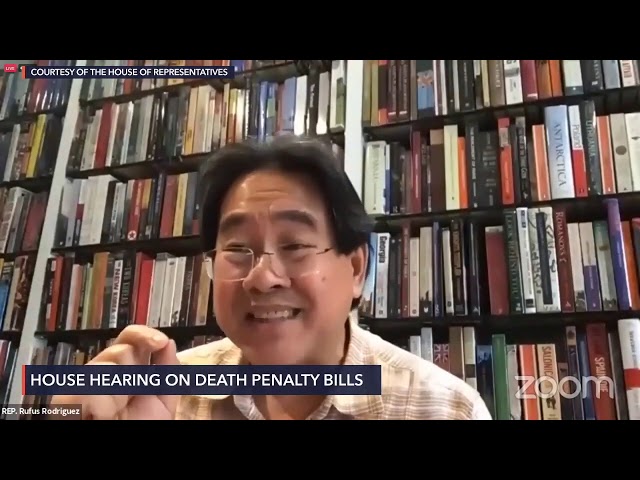 The Department of Justice (DOJ) was standing by its position that “there is no legal and constitutional impediment” stopping the Philippines from reviving the death penalty, but said this opinion was “limited only to the legality.”

“Our moral views are not relevant,” DOJ Assistant Secretary Nicholas Felix Ty said on Wednesday, August 5, during the House justice committee hearing on the death penalty bills, revived on the urging of President Rodrigo Duterte who gave the measure a special mention during his 5th State of the Nation Address.

Cagayan de Oro 2nd District Representative Rufus Rodriguez took Ty up on the discussion on legalities and pursued a heated interpellation on international law that had the DOJ official fumbling at times.

Rodriguez pounded Ty on how to reconcile a reimposition of the death penalty when the Philippines was a state party to the 2nd protocol of the International Covenant on Civil and Political Rights (ICCPR) that explicitly bans execution.

Article 1 of the 2nd protocol says “no one within the jurisdiction of a State Party to the present Protocol shall be executed” and that “each State Party shall take all necessary measures to abolish the death penalty within its jurisdiction.”

On Rodriguez’s grilling, Ty said: “We agree that the 2nd protocol of the ICCPR has language that no one can be executed within the territory of the state party.”

“But we can’t adopt a position that would imply that our Constitution can be amended by treaties or conventions,” Ty added.

The DOJ is relying on Section 19, Article III of the Constitution which said that “neither shall death penalty be imposed, unless, for compelling reasons involving heinous crimes, the Congress hereafter provides for it.”

This was the provision cited by Justice Secretary Menardo Guevarra when he said in an October 2019 position paper that the enactment of death penalty bills “is an exercise of the legislative power” of Congress.

Business interest piqued by prospect of US, Cuba trade

But how to reconcile Section 19, Article III, with Section 2, Article II of the Constitution which says that the Philippines “adopts the generally accepted principles of international law as part of the law of the land?”

Ty said the 2nd protocol of the ICCPR is not yet considered a customary law.

Before he reached this statement, Ty said several times that he cannot be certain if reimposing death penalty would constitute a breach of international obligations, but Rodriguez pressed and even said at one point that “DOJ should be certain, because you are the lawyers of the government.”

Human rights lawyer Chel Diokno, a resource person during the hearing, said there was no conflict between the Constitution and the ICCPR because the former was permissive and the latter was prohibitive.

“The fact that the Constitution allows Congress to pass death penalty under certain conditions cannot at all change the fact that we have an international obligation not to reimpose the death penalty,” said Diokno.

Diokno added it was not true that Philippines was the only Asian country that has abolished the death penalty. There are 13 others, he said.

An appeal to the DOJ

Guevarra said, however, in the same 8-page position paper that proposals of death by hanging and public viewing were unconstitutional.

Rodriguez’s interpellation was so heated that at times, he was almost taunting Ty by calling him “Professor” and saying that “any professor of international law” would not agree with the DOJ.

Ty teaches at the University of the Philippines (UP) College of Law. Rodriguez is also a UP Law alumnus, and was dean of San Sebastian College of Law.

“I admire you, you have very good intellect and I congratulate you for that, so I don’t know why for this particular case you have a different stance, but that’s understandable because you are in the executive,” Rodriguez told Ty.

Rodriguez turned to a softer tone by the end of his interpellation, and told Ty: “I hope in the next hearing, you will be against death penalty, also Secretary Guevarra, because I know that is in your heart.” – Rappler.com