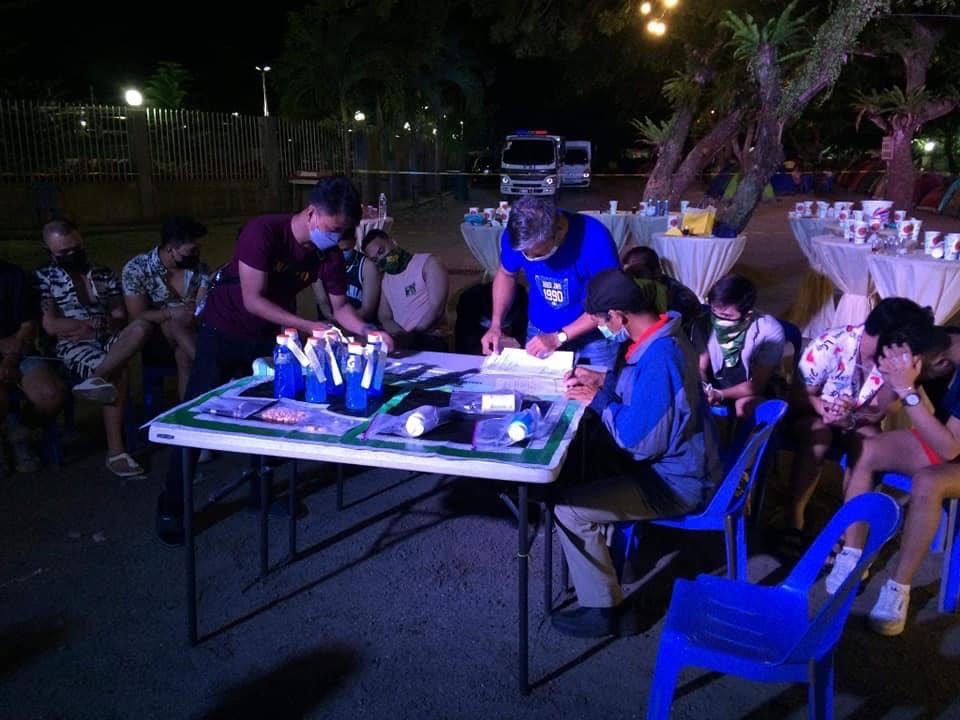 Facebook Twitter Copy URL
Copied
The raid resulted from a two-month surveillance on the group of Revsan Elizalde, says PDEA

Noli Dimaandal, PDEA spokesman for the Davao Region, said on Tuesday, November 9, that the complaints for violation of the Comprehensive Dangerous Drugs Act were filed on Monday, November 8, before the Provincial Prosecutor’s Office in Davao de Oro.

“The same [complaints] were filed against all 17 of them,” he said. They were still detained at the National Bureau of Investigation office in Davao City as of Tuesday afternoon because PDEA’s detention facility is full, Dimaandal said.

The Mabini resort raid sparked a controversy as pre-raid photos of the group that circulated on social media showed that Davao City’s information officer, Jefry Tupas, was there.

Tupas said she was one of the guests of Revsan Ethelbert Papey Elizalde, party host who turned out to be PDEA’s main target. The party was held at the Sea Eagle beach resort in Barangay Pindasan, Mabini, a two-hour drive from Davao City. Tupas told Rappler she attended the party but supposedly left after dinner to return to Davao City with her boyfriend and another companion.

Davao Mayor Sara Duterte on Tuesday said Tupas was fired on Sunday, November 7, for being “involved in a drug raid.”

Dimaandal said the raid was a result of about two months of surveillance on Elizalde’s group.

The 33-year-old Elizalde of Catalunan Pequeño, Davao City, was the main suspect in the PDEA watchlist. He was also the host of the party organized in time for his birthday.

Authorities pounced on Elizalde and four others after he allegedly sold a party drug and marijuana to an undercover agent.

The PDEA said law enforcers then caught at least a dozen others in a drug session, and found more suspected illegal drugs.

Colonel Kirby John Kraft, Davao City police chief, said he did not know Elizalde and was unaware that he was in the watchlist of the PDEA.

Kraft said neither does the Davao City police have a record on Tupas.

“This is not to clear anyone. I’m just saying that we don’t have a record on Tupas,” Kraft said.

But he said he would have Elizalde and the other suspects caught in Mabini, including Tupas, checked out.

Kraft said he was expecting the PDEA to determine where the alleged illegal drugs seized in Mabini were sourced.

“It’s PDEA’s operation and so, they should be able to say where the drugs came from,” Kraft said.

He claimed that the police in Davao City were intolerant of illegal drug activities to the point that drug possession and sale in the city have become high-risk undertakings.

Some of those arrested were Davao City-based young professionals who were caught with various types of drugs: LSD, meth, and marijuana. – Rappler.com