Senior citizens from Sta. Rosa City in Laguna receive their first jab of Sinovac's COViD-19 vaccine at the Sta. Rosa Sports Complex on May 6, 2021.

President Rodrigo Duterte criticized rich countries for hoarding coronavirus vaccines at the expense of poorer countries like the Philippines that continue to struggle with protecting its population against the deadly virus.

In his last address before the United Nations General Assembly past 5 am (Manila time) on Wednesday, September 22, Duterte did not mince words against the inequitable distribution of COVID-19 vaccines across the globe.

The Philippine President said it is “shocking beyond belief” that several developed nations are now talking of booster shots, while developing countries are considering half-doses just to get by.

“This is shocking beyond belief and must be condemned for what it is – a selfish act that can neither be justified rationally nor morally. The plain fact is – this pandemic will not end unless the virus is defeated everywhere. Vaccines are key to achieving this,” he added.

Duterte first made an appeal for universal access to COVID-19 vaccines when he faced the UN in December 2020.

But he has also been been criticized for mismanaging the public health crisis, the slow pace of the vaccination rollout among Filipinos, and his flip-flopping pandemic policies.

The Philippine government recently raised its target COVID-19 vaccination coverage to include 90% of the country’s population. This comes after the highly infectious Delta variant ramped up herd immunity thresholds for the disease.

This is an ambitious goal for the developing country, however, as the Philippines is expected to be among the last countries in Southeast Asia to reach herd immunity due to the lack of adequate vaccine supply and varying degrees of efficiency in rolling out vaccines across the archipelago.

As of September 8, only 14.37% of Filipinos has been fully vaccinated.

US President Joe Biden – who faced UN member-states for the first time on Wednesday – is set to convene a virtual summit on the margins of the General Assembly in a bid to boost vaccinations worldwide, with the goal of ending the pandemic by the end of 2022. 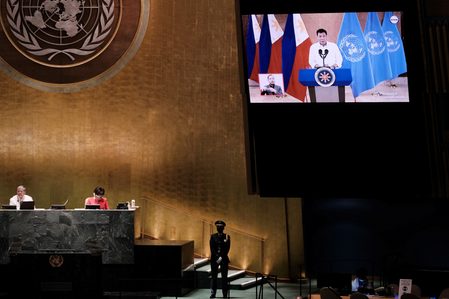 Duterte also asked developed nations to finally fulfill their longstanding financial support for poorer countries so they can combat the impacts of climate change.

Rich nations in the UN have an overdue pledge to raise $100 billion each year by 2020 to provide climate finance to developing countries, many of whom are grappling with rising seas, storms, and droughts made worse by climate change.

“The greatest injustice here is that those who suffer the most are those the least responsible for this existential crisis…. We therefore appeal for urgent climate action, especially from those that can truly tip the balance,” Duterte said.

The President said the Philippines accepts its share of the responsibility and will do its part “to avert this collective disaster.” He cited his moratorium on the construction of new coal power plants and his directive to explore the nuclear energy option.

Duterte’s climate commitment before the UN is for the country to reduce greenhouse gas emissions by 75% in 2030.

But while the Philippines vows to reduce GHG emissions by 75%, only 2.71% of this is an unconditional target, meaning the government commits to make this reduction using its own resources, with or without external aid.

The remaining 72.29% reduction would only be met if the Philippines is provided assistance from the international community. – Rappler.com