Gierran, who retired from the NBI in February, still needs to be elected by the PhilHealth board before he is able to assume the role of CEO and president.

“He is a retired director of the NBI. Gierran is a lawyer and an accountant, so I think, and I told him, the next two years will be devoted to fight against corruption. Look for people we can put behind bars,” Duterte said in a mix of English and Filipino during a Cabinet meeting aired later on Monday.

In the same Cabinet meeting with Duterte, Gierran said he is “aghast” whenever he hears about the “sorry state of PhilHealth.”

“I did not apply for the position because I know it is a very tough job. But just like General Galvez and like Secretary of National Defense (Delfin Lorenzana), I’m also a good soldier,” Gierran said, adding that he is “one who would not back out from a mission.”

Gierran’s nomination comes days after PhilHealth workers appealed to Duterte to “stop appointing (people) who are not qualified” to run the state health insurer, as the President should instead appoint “an expert to handle PhilHealth.”

If chosen by the PhilHealth board, Gierran will have the crucial task of cleaning up the state-run insurance firm whose officials have been hounded with accusations of rampant corruption.

Marathon hearings at the Senate and the House of Representatives have revealed a laundry list of anomalies involving billions in taxpayers’ money that included the release of funds under PhilHealth’s Interim Reimbursement Mechanism, proposed information technology budget, and notorious case rate system. 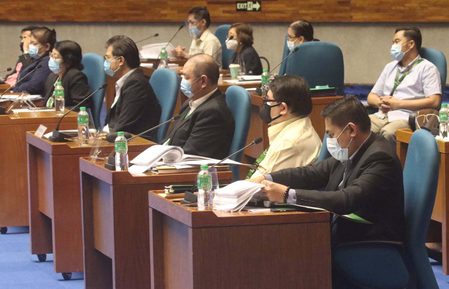 Duterte earlier ordered the creation of a task force to investigate alleged corruption in PhilHealth. The task force has the power to conduct lifestyle checks on PhilHealth executives and issue preventive suspension should it find evidence of wrongdoing.

Gierran is also poised to take the helm of PhilHealth as the country battles the coronavirus pandemic, with the state insurer paying for thousands of Filipinos’ treatment, testing, and hospitalization.

Gierran left his position at the NBI last February upon reaching the mandatory retirement age of 65.

Gierran’s stint at the NBI was not without controversy, as Edgar Matobato, a self-confessed former member of the Davao Death Squad, had linked the official to the killing of a man in 2007 who was “fed to crocodiles.”

In 2018, Gierran defended the NBI’s flip-flopping on the cyber libel complaint against Rappler. Initial information showed the complaint had been dismissed by the NBI, but Gierran claimed “there was no reversal.”

The NBI forwarded the complaint to the justice department, which recommended the filing of a case against Rappler. A regional trial court has since convicted Rappler CEO Maria Ressa and former researcher-writer Reynaldo Santos Jr of cyber libel. – Rappler.com