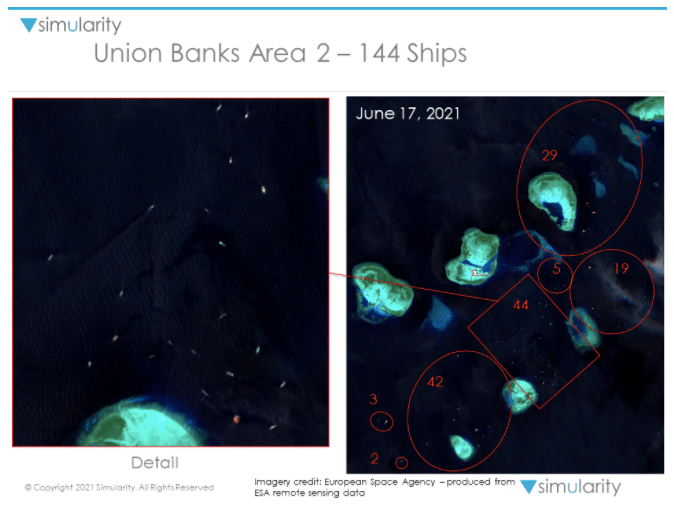 CHINESE SHIPS. Satellite image of Union Banks taken by Simularity between May to June 2021.

Cabinet members of the Duterte government cast doubt over a recent report of a US-based think tank that said human waste and sewage were being dumped on the Spratly Island group.

Defense Secretary Delfin Lorenzana questioned the veracity of the report.

“We also question the conclusion reached by Simularity from just looking at satellite photos,” the defense chief said in a statement on Tuesday, July 13.

During a forum on July 12, the fifth anniversary of the 2016 Hague ruling, US-based geospatial imagery firm Simularity said that hundreds of lingering ships in Union Banks in the West Philippine Sea are dumping human waste and sewage, causing environmental damage that could take decades to reverse.

According to Liz Derr, Simularity’s chief executive officer, the damage to coral reefs in the resource rich waters is visible from satellite images taken over the last five years.

The images showed growth of plants and algae on what were once healthy coral reefs in the Philippines’ exclusive economic zone. The growth of algae over the years had been spurred by high concentrations of chlorophyll formed from “excess nutrients” coming from the ships’ sewage waste. Derr said during the forum that sewage waste included ship wastewater and human waste.

“When the ships don’t move, the poop piles up,” Derr said.

Lorenzana claimed that the photo of a ship dumping waste used by the firm in its report is misleading. Simularity’s report had used an image of a ship from “Marine Executive” as a visual aid, but based its findings only on satellite images the firm captured and analyzed. “We have taken note of the news circulating online about the alleged dumping of wastes in the South China Sea. However, the photo of a ship seen dumping waste accompanying the report was found to have been taken in the Australian Great Barrier Reef in 2014. Therefore this intent to mislead has cast great doubt on the accurateness  of the Simularity Report,” Lorenzana said.

In a series of tweets, Foreign Secretary Teodoro Locsin Jr. raised similar concerns about the group’s report, saying the country “can’t and should not do foreign policy on the word of a liar in part who like is a liar in whole.”

“It’s just not done. I hope this does not become a political issue because it will make our democracy look and smell like a public toilet,” Locsin said.

Meanwhile, Oceana, an international organization promoting the protection of the seas, condemned the alleged dumping and encouraged the Duterte government to immediately act on the report.

“As a signatory to the International Convention for the Prevention of Pollution from Ships (MARPOL) which safeguards against pollution by sewage and garbage from ships, the Philippines should begin an investigation on this deplorable abuse of our territorial waters,” the group said in a statement.

The group also reminded the government of the country’s existing laws prohibiting the dumping of waste in waters.

Report to be probed

Despite this, Lorenzana said he already directed the Armed Forces of the Philippines Western Command (AFP Westcom) to verify and investigate the report.

The defense chief added that if the reports are true, the dumping of waste would adversely affect the country’s marine ecology.

“While we are confirming and verifying these wastes being dumped in the WPS, we consider such irresponsible acts, if true, to be gravely detrimental to the marine ecology in the area,” the defense chief said.

Locsin, meanwhile, said the Department of Foreign Affairs would not investigate nor look into the group’s report because the agency did not have the “maritime capability” to do so.

Lawmakers had called on the Duterte government to take action against the ships’ destructive practices since they are a violation of Philippine and international law. At the very least, senators said, the government should confirm and assess the damage caused by the ships’ sewage in Philippine waters.

“China treating us as its toilet is a clear violation of both international and local environmental laws…. We can only hope that this comes as a wake up call to the administration on the stinking reality that China gives no respect to international law, whether it be our territorial or environmental rights,” Senator Grace Poe said. 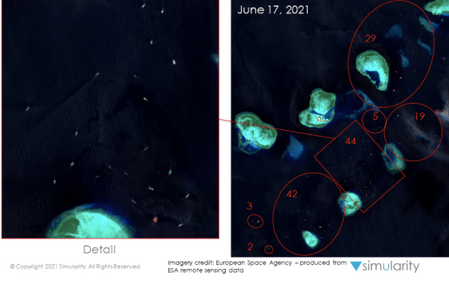 On June 23, Simularity reported that over 200 Chinese ships were spotted in different maritime features located in the West Philippine Sea. According to the firm, a total of 236 Chinese vessels were spotted in the Union Banks from May to June. – Rappler.com