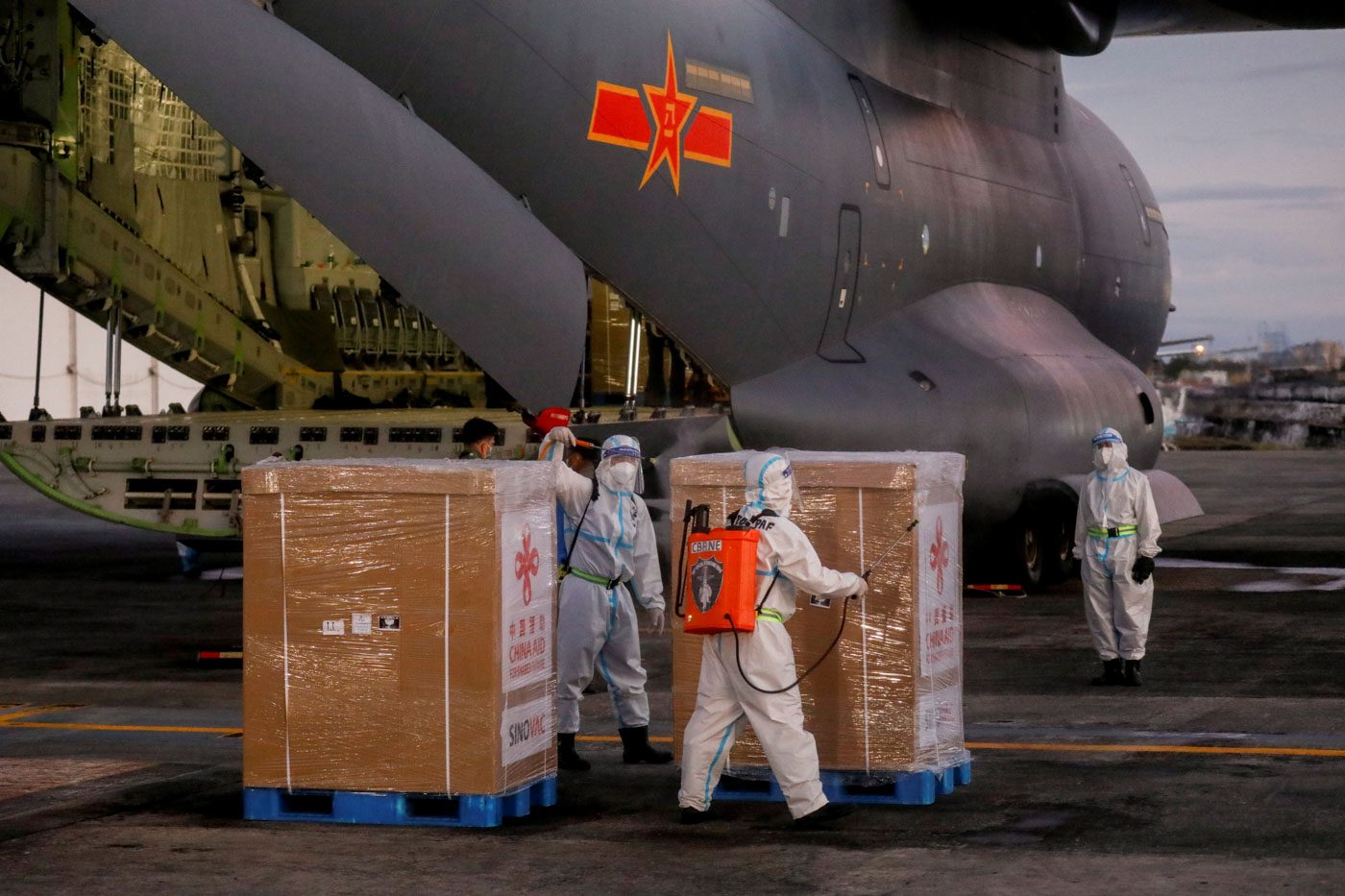 VACCINATION PROGRAM. Workers in hazmat suits disinfect boxes of Sinovac Biotech's CoronaVac vaccine against COVID-19 after unloading them from a Chinese military aircraft at Villamor Air Base in Pasay, Metro Manila, Philippines, February 28, 2021.

Facebook Twitter Copy URL
Copied
Priority areas should go beyond ‘NCR Plus,’ Cebu, and Davao, says the League of Cities of the Philippines

The League of Cities of the Philippines (LCP) urged the national government to include more high-risk areas with reported surges in COVID-19 infections in its priority list for vaccine rollout.

In a letter to National Task Force on COVID-19 Chief Implementer Carlito Galvez Jr dated Tuesday, May 25, the group requested “that the list of recipients expand beyond the identified initial priority areas such as ‘NCR Plus,’ Cebu, and Davao.”

LCP national president and Bacolod Mayor Bing Leonardia, as well as LCP secretary-general Calapan Mayor Arnan Panaligan, noted in their letter that areas outside the three key places reported surges in cases. These areas include Batangas, Pampanga, Cagayan Valley, and some localities in the Cordillera Administrative Region.

“Since the beginning, cities remain epicenters of the pandemic with an increase in the number of cases. Thus, city mayors worry about the declining vaccine supplies in their respective localities amid these surges,” the letter read.

“We deem that the preemptive action of distributing vaccines to a broader number of cities will prevent a potential new wave of case surges throughout the Philippines,” the LCP added.

The group however also acknowledged the national government’s burden of finding a “delicate balance” between distributing vaccines to current hotspots and “allocating [vaccines] to emerging hotspots that may become critical areas.”

The LCP, institutionalized by the Local Government Code of 1991, is a formal organization of over 100 cities in the country.

Under the government’s strategy, COVID-19 vaccines are deployed to “high burden” areas and groups most at risk of contracting the virus.

As of May 18, Metro Manila, the COVID-19 epicenter of the Philippines, received 2.7 million out of the 7.7 million vaccine doses available, the highest share among regions.

Second in the list is Calabarzon region, which has received some 859,000 vaccine doses as of May 18. Three provinces here – Cavite, Laguna, and Rizal – are all part of “NCR Plus,” along with Metro Manila and the province of Bulacan.

While “NCR Plus” shifted to more relaxed lockdown restrictions by mid-May, areas outside the metropolis such as Iloilo City, Apayao, Cagayan, and Benguet are still grappling with the modified enhanced community quarantine, the second strictest form of lockdown under the Duterte administration, due to COVID-19 surges there. – Rappler.com