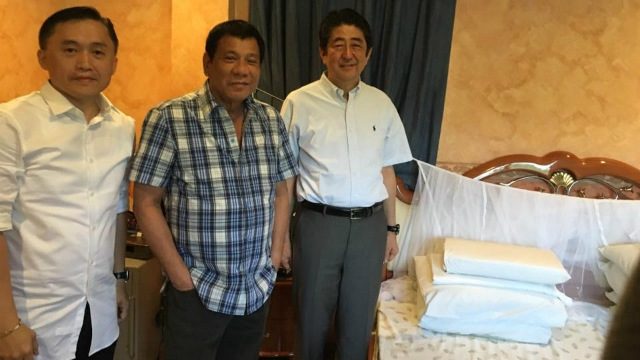 President Rodrigo Duterte said in an official statement on Saturday, August 29, that he regretted the resignation of Japan’s Prime Minister Shinzo Abe, whom he called “a true friend closer than a brother” to him and to Filipinos.

“It is with much regret that I learned of Prime Minister Shinzo Abe’s resignation,” Duterte said.

“Through many years of our engagement, I have seen a leader with a bold vision and firm determination to do what was best for his country and our region,” he added

Ties between the Philippines and Japan “greatly flourished” under Abe, and were formalized into a strategic partnership in 2009, Duterte noted.

“What we have worked for and achieved together lays the foundation for an even closer friendship and cooperation between our countries in the future,” Duterte said.

Since his election as President in 2016, Duterte has had several engagements with Abe. They met at the yearly Association of Southeast Asian Nations (ASEAN) Summit with other regional and world leaders.

Duterte met with Abe in Japan thrice – in October 2016, October 2017, and May 2019. Abe has visited the Philippines as Prime Minister 4 times, two of which were during Duterte’s term.

In his January 2017 official visit to the Philippines, Abe met with Duterte in his hometown Davao City, and visited Duterte’s house.

“He is – to me and the Filipino people – a true friend closer than a brother…. I pray for your speedy and full recovery,” Duterte added.

Abe announced his resignation as Prime Minister of Japan on Friday, August 28, for health reasons. He said he is suffering from a recurrence of ulcerative colitis, which earlier also forced him to cut his first term in 2007. He began his second term as Prime Minister in December 2012.