NOT LIABLE? President Duterte has no harsh words for hotels where guests skip mandatory quarantine critical to keeping COVID-19 variants from spreading in the country.

MANILA, Philippines – Hotel owners and managers seem to have found an unexpected ally in Philippine President Rodrigo Duterte who on Tuesday, January 4, cleared them of liability for the skipping of mandatory quarantines by their guests.

“It will not be legally correct to go after the hotel owners or the managers there, or whoever is attending to the needs of the people that are inside the hotel because of quarantine reasons,” said Duterte during a meeting with pandemic task force officials and doctors in Malacañang.

“We cannot transfer the power now of even stopping if they would want to, if they would insist to go out. The hotel owners or whoever is working there cannot be tasked [with] placing the burden of enforcing the rules on quarantine because only government can enforce it,” he continued.

The President, who has previously projected an image of an iron-fisted disciplinarian, claimed hotel employees and owners “cannot be in a position legally to stop” their hotel guest from breaching quarantine.

But his own justice secretary held different views.

Justice Secretary Menardo Guevarra, sought by Duterte for his legal opinion, said Republic Act No. 11332 or the Mandatory Reporting of Notifiable Diseases and Health Events of Public Health Concern Act, does state that hotel personnel can be held liable for such breaches.

“With due respect,” began Guevarra, “I can see something in the existing law, RA 11332… Mr. President, there is a provision there on non-cooperation as part of prohibited acts Mr. President, and it seems to me that non-cooperation on the part of certain entities which are charged with a duty to respond to the pandemic may also be punishable.”

“So these entities, Mr. President, may include establishments which are charged with the duty, for example, as a quarantine hotel to ensure that people who are quarantined within the establishment should not be able to jump the quarantine regulations, I think that can also be used,” said Guevarra.

The justice secretary is referring to Section 9 of the law, which lists down prohibited acts related to reporting of diseases.

One of these prohibited acts is “non-cooperation of persons and entities that should report and/or respond to notifiable diseases or health events of public concern.”

Yet Duterte did not appear convinced. He asked Guevarra if hotel personnel could “physically stop” a person who wanted to leave the hotel before completing their quarantine stay.

Guevarra said there are ways, like if the hotel staff were to demand proof from the guest that they are breaking quarantine for valid reasons, like for a health emergency, that would be the only instance when they would let the guest leave.

“If they would be leaving the premises of the hotel without justifiable reason, then I think, Mr. President, they should not be allowed to exit the hotel, and (the) hotel can do that,” said Guevarra.

Duterte then said he believed the justice secretary is correct but still insisted that, “physically,” hotel staff would be unable to prevent a violent person who insisted on leaving the establishment. He appeared to think that all hotel guests would be aggressively trying to break quarantine to the point that only a government authority, like the police, would be able to stop them.

“Makipaglabanan na (If they fight back), that becomes a problem already. Yung delegated power is not really very clear that they can stop or bar or prohibit, medyo kulang ang batas (the law is lacking),” said Duterte.

Eventually, Guevarra relented, agreeing that hotels don’t have “coercive power to stop” guests but “they can report a violation.”

Duterte insisted that he now needs to deploy police to man quarantine hotels on the premise that the establishments themselves can’t do the job.

“What I propose for government to do is we have yet to see this, Secretary Año, sir, can you put police in hotels being used for quarantine? Two police in two shifts,” said the President in a mix of English and Filipino.

Duterte’s order comes at a time when the government is investigating how a woman who travelled from the United States skipped her mandatory quarantine at Berjaya Makati Hotel, a violation with grave consequences because she eventually tested positive for COVID-19.

Berjaya Makati faces an investigation led by the Department of Tourism and has been issued a notice to explain, following its earlier denial that the traveler stayed in the hotel.

The tourism and interior departments warned establishments that any hotel found liable for violating quarantine protocols may have their accreditation revoked.

Officials, like Año, have since admitted there have been many previous incidents of persons skipping quarantine, and even of a scheme called “absentee quarantine” where a hotel accepts payment from a traveler to allow the traveler to skip quarantine. 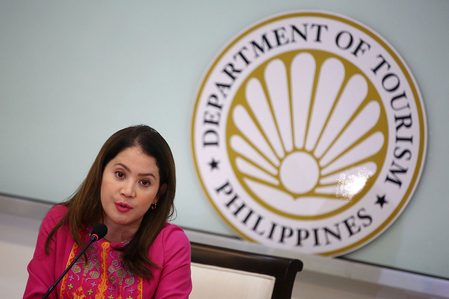 Año’s deputy, Undersecretary Jonathan Malaya, even said on Monday in a virtual press briefing that it’s “quite impossible” that Berjaya Makati had nothing to do with their guest’s violation. This is in contrast to Duterte’s apparent belief that hotels should not be held liable for quarantine breaches.

The PNP have been ordered to conduct random visits to quarantine hotels to stop the “absentee quarantine” modus. Meanwhile, Bureau of Quarantine director Ferdinand Salcedo told Duterte on Tuesday that the bureau did not find any case of its staff involved in letting travelers get away with skipping quarantine.

Secretary Guevarra said the National Bureau of Investigation has been tasked with probing how arriving travelers could be breaching mandatory quarantine. – Rappler.com