TALK TO THE PEOPLE. President Duterte addresses the people after holding a meeting with key government officials at the Arcadia Active Lifestyle Center in Matina, Davao City on April 11, 2022. 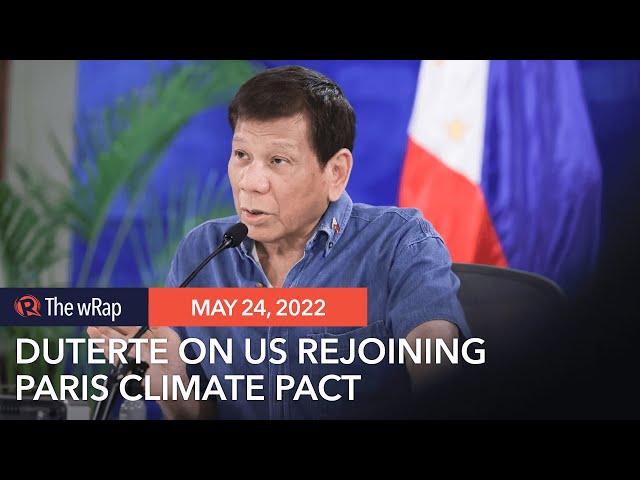 MANILA, Philippines – Philippine President Rodrigo Duterte launched a fresh tirade against the United States and other Western powers for lack of action on reducing carbon emissions but appeared not to have been updated on one crucial detail: America, under President Joe Biden, has rejoined the 2015 Paris Climate Change Agreement.

On Monday, May 23, Duterte admonished the US for leaving crucial climate change treaties. While President Donald Trump had the US quit the Paris climate pact in 2020, his predecessor, Biden, had the superpower rejoin it a year later.

“America is not a member of this commission. Paano ba ito? (What then?) Because unless they come to their senses, actually, they cannot expect the smaller nations with the least emissions – pipilitan nila sumunod tapos sila ayaw (they will force them to comply even if they refuse to do the same),” said Duterte as Climate Change Commission vice chairperson Robert Borje began his presentation on the Philippines’ climate efforts.

Later on, Duterte said: “Like America, it has withdrawn from all the agreements regarding climate change. Gusto natin gumanti rin, wala man tayong magawa. (We want to fight back but we can’t do anything.)”

Nobody in the room of government officials directly corrected him. The closest to a clarification came from Borje, who quipped, after an interjection by Defense Secretary Delfin Lorenzana, that Biden “said he would rejoin.”

Bringing back US participation to the Paris climate deal was one of the first executive measures Biden signed on his first day as president. The US officially reentered the pact in February 2021, a month after Biden signed the executive order starting the process.

He had undone a controversial move by Trump to officially abandon the climate accord in 2020, a year after the US, under his presidency, notified the United Nations of the decision.

Duterte brought up his long-time beef against the UN climate change negotiations for its lack of sanctions, saying again that this is why wealthy nations get away with insufficient efforts to cut their carbon emissions.

So determined is he to put teeth in the international talks that he said he wants to attend the next climate change conference.

“Ako na ang pupunta doon (I will be the one to go there)!” he said, even if he had called the UN climate conferences a “waste of time” in 2019.

Told by Borje that the next two meetings will take place in Stockholm, Sweden and Bonn, Germany, he ordered climate change officials to just “raise hell in the next meeting.”

“Sampalin mo na lang (Just slap them),” was his advice to Borje if countries refuse to include sanctions in climate change deals. He also said he wished he had attended one climate conference during his term so he could deliver a “lecture.”

In response, Borje praised Duterte’s idea of sanctions as “revolutionary.”

Except, the concept of imposing sanctions on countries that fail to meet targets on carbon emission cuts is not new. In 2001, as negotiators from different countries tried to thresh out a key climate deal, the Kyoto Protocol, a sanctions regime was established that would require countries who failed to meet targets to commit to even bigger targets in the coming years.

But most countries rejected the idea of sanctions, including the world’s two largest emitters, China and the US. Eventually, negotiators had to abandon sanctions as a way to move forward with a broader agreement that would include as many countries as possible.

Duterte is not alone in seeing the lack of sanctions as a fundamental flaw of climate agreements.

In the historic Paris climate agreement, almost 200 countries party to it agreed to target a reduction in their greenhouse gas emissions, a target that is to be regularly revised and ratcheted upwards. The deal also recognizes that industrialized nations must take the lead in these emission reduction efforts and help poor, vulnerable nations protect themselves from impacts of climate change.

Under Duterte’s presidency, Philippine representatives to the annual UN climate change conferences have made “climate justice” their main battlecry.

In international fora, Duterte has spoken in strong language about how developed countries should step up their efforts to curb global warming because it is developing countries like the Philippines suffering the worst from its effects. – Rappler.com