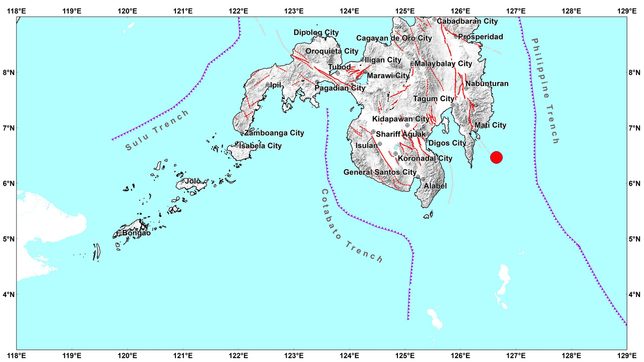 Facebook Twitter Copy URL
Copied
(4th UPDATE) A seldom-used airport in Davao Oriental had minor cracks on the runway, but there was no damage to the passenger terminal building

The Philippine Institute of Volcanology and Seismology (Phivolcs) reported in a bulletin that the earthquake, which was tectonic in origin, struck at 1:46 am off the coast of Davao Oriental.

Phivolcs said that there was no tsunami threat but damage and aftershocks were expected.

At 6:06 am, Phivolcs further revised its report to a magnitude 7.1 earthquake, at a depth of 39 kilometers.

Airports, sea ports and key infrastructure were for the most part unaffected by the quake, while all personnel were accounted for, the transportation department said.

A seldom-used airport in southern Davao Oriental province had minor cracks on the runway, but there was no damage to the passenger terminal building, it said.

The US National Weather Service and Hawaii Emergency Management also said there was no risk of a tsunami for the US West Coast or Hawaii.

The Philippines is on the geologically active Pacific Ring of Fire and experiences frequent earthquakes. – with a report from Reuters/ Rappler.com