Eleazar orders investigation into killing of 2 activists in Albay

KILLED. Cops killed activists Jomar Palero and Marlon Naperi who did not get to finish writing this anti-Duterte slogan ('oust Duterte') on Banao Bridge in Guinobatan, Albay, on July 26, 2021, the day of President Rodrigo Duterte's final State of the Nation Address.

Philippine National Police (PNP) chief General Guillermo Eleazar on Wednesday, July 28, ordered an investigation into the killing of two activists who were allegedly shot dead by cops who caught them spray-painting an anti-Duterte slogan on a bridge in Albay.

Eleazar said on Wednesday that he directed the PNP Internal Affairs Service (IAS) to conduct the probe to eliminate “speculations” over the deaths of activists Jomar Palero and Marlon Naperi in Guinobatan town on Monday, July 26, the day of President Rodrigo Duterte’s final State of the Nation Address (SONA).

(To eliminate speculations and allegations regarding the death of two activists in Albay, I already ordered the Internal Affairs Service led by Inspector General Alfegar Triambulo to prioritize and speed up the investigation to determine what really happened in that incident.)

Eleazar also said that he has ordered Bicol police chief Brigadier General Jonnel Estomo to put the cops involved under restrictive custody while the probe is ongoing.

Eleazar also urged witnessed to come forward to shed light on the killing.

(We also call on the witnesses or those who have information about the incident to cooperate with the investigators to solve this case.)

According to Defend Bicol Stop the Attacks Network, the activists were in the process of spray-painting a slogan on Banao Bridge that should read, “Duterte ibagsak (Oust Duterte),” but they only managed to write “Duterte ibags” as the activists, who the group said were unarmed, were killed by police.

In the police version of the incident, cops on mobile patrol saw the activists vandalizing the Banao Bridge, and when the activists spotted them, they allegedly fired shots at the cops, supposedly prompting the latter to shoot back.

Palero and Naperi are the latest activists to be killed in the country, but their case appeared to be unique as they were shot while writing an anti-government slogan.

Other activists had been killed while being served arrest or search warrants, but like the two Albay activists, these activists – according to cops – also supposedly fired at police first. Such incidents have been known under the Duterte administration as alleged cases of “nanlaban (resisted arrest)” that first proliferated in the early days Duterte’s campaign against illegal drugs and continues to this day. 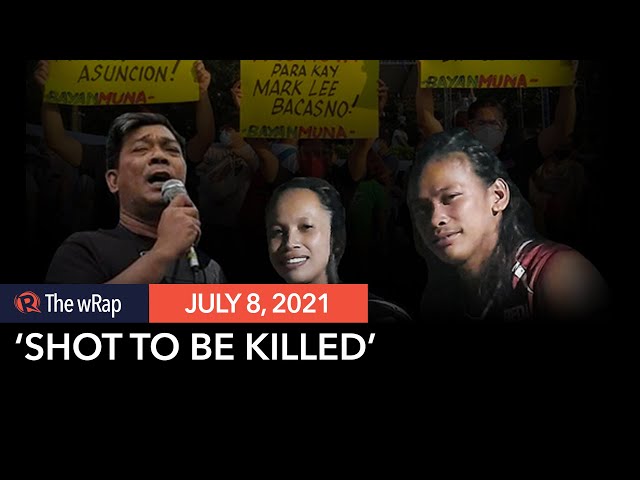 There are around 414 victims of extrajudicial killings in the country from June 2016 to July 2021, according to rights group Karapatan. Of this number, 211 are activists. – Rappler.com