Bongbong on 2016: No downside to being a Marcos

Aug 16, 2015 7:06 PM PHT
Ayee Macaraig
Facebook Twitter Copy URL
Copied
Senator Marcos says: 'I do not see any bad side to being a Marcos. I am so lucky to be the son of a president who has done so much. I think I am the luckiest person I know' 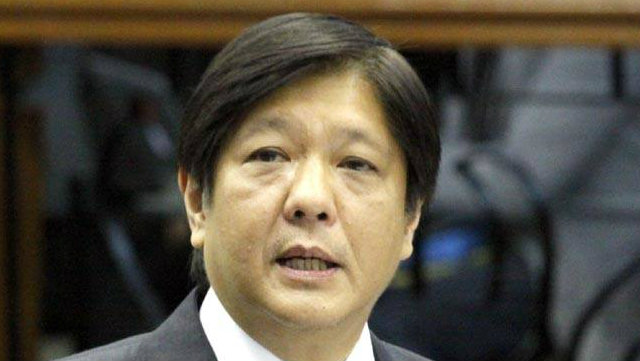 MANILA, Philippines – “I am so lucky to be the son of a president who has done so much, helped so much, and did many changes for the Philippines.”

Senator Ferdinand “Bongbong” Marcos Jr believes his family name will not be a baggage to a possible 2016 presidential candidacy. Marcos said being the son of the late dictator Ferdinand Marcos will even draw many supporters to his campaign if he vies for higher office.

(I do not see any bad side. In my experience, I am such a lucky person to be born as the son of a President who has done so much for the Philippines, and to a mother who also provided many services.)

Marcos has admitted considering running for president or vice president in the polls next year, along with the option of seeking re-election.

Despite criticism of human rights violations and corruption against his family, Marcos said his clan maintains a core base of supporters.

Is the Philippines ready for another President Marcos?

“That is what we are assessing. Exactly that is the question that needs to be answered. The political situation now is unclear. It’s already August, and we still do not see a clear tandem, or a clear coalition. So we really have to assess what the political situation is,” the senator said.

The Marcoses have been haunted by allegations of ill-gotten wealth, cronyism, and abuse since the former president’s term spanning 1965 to 1986. Marcos supporters though point to the infrastructure, and law and order that were in place under martial law.

The family has long returned to power, with former First Lady Imelda Marcos now representative of Ilocos Norte, while her daughter, Imee, is the governor of the province. Ilocos Norte, part of the so-called “solid north,” is the bailiwick of the Marcoses, and the home province of the late president.

Senator Marcos said it has always been his mother’s dream for him to return to Malacañang as president.

(I joke that even when I was a child, her stand was already that I should be president.)

Marcos is a member of the Nacionalista Party (NP) of tycoon and former Senate President Manuel Villar Jr. The party does not have a candidate for president, but has 3 potential vice presidential bets including Senator Antonio Trillanes IV, and possibly Senator Alan Peter Cayetano and Marcos.

Marcos said that he will express his views to the NP to ensure that he is part of the party’s plans.

“Of course, I am a party member, and if I decide to run for a national position, I will need the support of my party, the Nacionalista. So whatever the NP decides on, I am part of those discussions. I will have to say my piece: if I agree or not. But whatever the party decides on, of course I am part of this party so I will join the stand of the Nacionalista,” Marcos said.

Senator Cynthia Villar, Villar’s wife, though said in July that the NP will not give financial support to Marcos, Trillanes or Cayetano because the party does not have money.

Another complication to a possible Marcos run arises from reports that the NP might back the potential tandem of Senator Grace Poe and Senator Francis Escudero. The party clarified that it has yet to pledge support to any candidate, and finalize its 2016 plans.

For now, Marcos said that the NP is still “technically in coalition” with the ruling Liberal Party (LP), which is backing the bid of its president, Interior Secretary Manuel Roxas II.

Marcos said that the NP will decide by the end of September who to support in the polls.

“I think each member has his or her own idea. What will happen is we will meet, first with the executive committee, the leadership, then eventually with the rest of the members. I think that will happen soon. By that time when it will all become clearer, it will be easier to make a decision, both for the party and the individual candidates,” Marcos said.

For now, politicians and political observers are on a wait-and-see mode as Poe contemplates running for higher office or not. She faces legal issues surrounding residency and citizenship qualifications. Even her post as senator was challenged with a case before the Senate Electoral Tribunal.

Aspirants will file their certificates of candidacy in October.

Two weeks ago, Marcos revealed that Binay’s United Nationalist Alliance (UNA) raised the idea of drafting him as Binay’s running mate but plans have yet to be finalized.

Marcos has said that he is “flattered” to be considered as a possible running mate of Binay despite their political histories. Binay was a human rights lawyer who opposed the Marcos regime.

Their possible partnership and politicians’ indecision over 2016 are a symptom of the Philippines’ weak political party system, and allegiances that shift from one election to the next. – Rappler.com