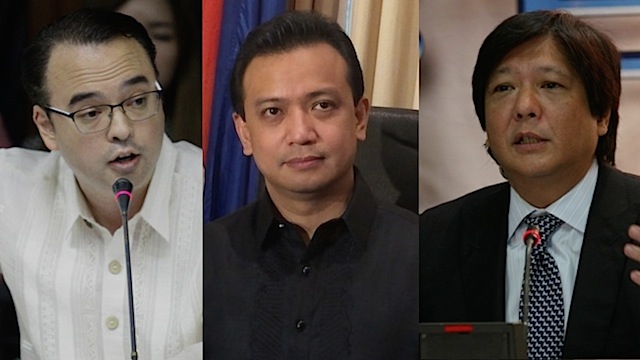 MANILA, Philippines – The Nacionalista Party will declare a “free zone” if two or more of its members decide to run for vice president, according to NP Senator Cynthia Villar.

It means the leadership of the country’s 3rd biggest political party will not impose on its members to support a particular presidential candidate. There will be no party stand.

This would be a big blow to the ruling Liberal Party, which is hoping to keep its rainbow coalition with the country’s biggest political parties intact for the 2016 presidential race.

A source close to Trillanes told Rappler that he has offered to support Senator Grace Poe, should she run for president.

The other two NP senators, Ferdinand Marcos Jr and Alan Peter Cayetano, have yet to finalize their plans although both NP senators have been running political ads.

“Iyong amin (As far as we’re concerned), they will be free to choose among them lang,” said Villar on Monday, August 17. (READ: NP won’t fund Trillanes, Cayetano, Marcos in 2016)

Villar confirmed that ruling LP standard-bearer Interior Secretary Manuel Roxas II has been talking to several NP stalwarts, but maintained that he has not made a definitive offer.

(I think they’re still weighing their options. There’s nothing definite. Has LP decided who to field [for vice president]? They have not made offers. They’re just floating [names].)

Roxas has been talking to Poe, inviting her to become his running mate in 2016. But Poe, the survey frontrunner, appears set to run for president.