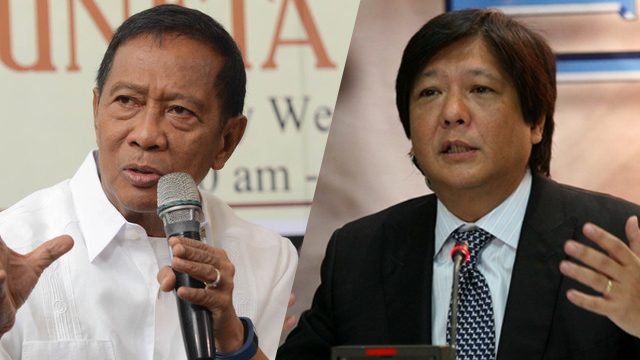 Facebook Twitter Copy URL
Copied
Binay is willing to work with ex-rivals to boost a presidential bid that a corruption controversy has weighed down, and to consolidate forces opposed to the administration

This was the feisty response of Vice President Jejomar Binay in 2013 to criticism that he was pretending to be an ally of President Benigno Aquino III. The founder of the then self-styled “constructive opposition” recounted his days as a human rights lawyer jailed during martial law, and later as opposition leader to the graft-tainted Arroyo administration.

Fast-forward to 2015, Binay’s tone is not as bombastic. The man “running scared” in a presidential race he once handily led openly admits wanting to team up with the son and namesake of the late dictator Ferdinand Marcos.

“Hopefully, the Binay administration will be remembered as the unifying administration,” the opposition standard-bearer said in response to a question about Senator Ferdinand “Bongbong” Marcos Jr two weeks ago. “Let’s move, move on. We have new problems to face.”

Despite the political baggage, Binay’s allies told Rappler that Marcos Jr is the first choice to be the former Makati mayor’s vice presidential bet, but talks are still ongoing. A consummate politician, Binay is also aiming to clinch alliances with political parties including former President Gloria Macapagal-Arroyo’s Lakas-CMD.

In a country with no real political party system, Binay is willing to working with ex-rivals to boost a presidential bid that a corruption controversy has weighed down, and to consolidate the forces opposed to the Aquino administration. The series of rebuffs embarrassed Binay, creating a perception that politicians were avoiding him after a Senate inquiry into corruption allegations, and multiple plunder complaints removed his long-held front runner status.

Yet one name did not reject the former street parliamentarian: Marcos. “I am flattered to be considered but all decisions made at a national level will have to include consultations with my party.”

‘He was never part of the machinery of martial law. It’s just the accident of his birth that he became a Marcos. Many of us are very impressed with his performance.’

“Their preference is Bongbong. VP is Ibanag. He doesn’t speak Ilocano. Bongbong has the Ilocano and the Waray vote. The Waray vote will never go to the Liberals because people are mad because of [Super Typhoon] Yolanda. So Bongbong complements us,” Suarez said.

A member of Binay’s selection committee, Suarez said that a Binay-Marcos tandem will cement the vice president’s hold of Regions 1 and 2. A former governor and congressman, Marcos is from Ilocos Norte while Binay’s mother is from Isabela. Marcos also has roots in Leyte, the hometown of his mother, former First Lady Imelda Romualdez Marcos.

Senator Marcos revealed that United Nationalist Alliance (UNA) president Toby Tiangco already broached the idea to him, and he finds it “viable.” Still, he has yet to decide whether to run for president, vice president, or re-election. Just over the weekend, he was still toying with the idea of being the second Marcos to be commander-in-chief.

UNA Secretary-General JV Bautista told Rappler that Marcos is “pretty much present in the consciousness of many UNA leaders.”

“He was never part of the machinery of martial law. It’s just the accident of his birth that he became a Marcos but he has his own track record. Many of us are very impressed with his performance. Look, he did not vote to convict [former Chief Justice Renato] Corona. He opposed the postponement of the [2011] elections in the Autonomous Region in Muslim Mindanao.”

On resisting the Aquino-backed initiatives, Bautista said: “He has moral courage.”

Like Binay, Marcos is also not in favor of the original Bangsamoro Basic Law, which aims to create a more powerful autonomous region in Muslim Mindanao. The two have said that they want a bill that is more inclusive, and the process must not be rushed.

What does Binay look for in a number two? He and his party mates often say that the candidate must be pro-poor; and have local or managerial experience, a known bailiwick or party, funds, and the qualification politicians are fond of citing: “winnability.”

Suarez said that Marcos fits the bill. For now, talks with Marcos are still limited to the level of UNA’s selection committee, and have not gone up to Binay, the party chairman. Also on the shortlist is Senator Miriam Defensor Santiago, another odd choice considering she criticized Binay at the height of the corruption scandal last year, and even delivered a speech titled, “The Curious Case of the Taciturn Vice President.“

Suarez approached Santiago’s husband, Narciso “Jun” Santiago Jr, about the possibility of the self-proclaimed “most influential senator on social media” partnering with Binay, the favorite target of angry memes and comments online.

‘Miriam is an ideal equalizer because we’re not popular with the youth. If they will team up, we might get that support, too. She is so popular with college students.’

“Miriam is an ideal equalizer because we’re not popular with the youth,” said Suarez. “Now if they will team up, we might get that support, too. She has 10% [in the surveys]. If we get the sympathy of 5%, that’s big. Plus, she is so popular with college students. She has the most hits on the Internet.”

The former interior undersecretary responded that his wife’s doctor must gauge if she can handle a full campaign. Santiago has stage 4 lung cancer but recently said her illness was “controlled,” prompting her to eye a Malacañang bid.

There, too, are other colorful characters still on the list even after expressing preference for the presidency instead of being second-in-command: Duterte and former Senator Panfilo Lacson.

UNA Spokesperson Mon Ilagan said that Binay believes Duterte will highlight the Vice President’s own track record in Makati. “He became a very good mayor, just like VP Binay. Mayor Duterte has made Davao a peaceful city. In fact it is the 7th peaceful city in the world so Mayor Digong has performance.”

The challenge for Binay is to convince Duterte or Lacson to slide down instead of running against him or returning to their old turfs. So far, his team sent out feelers to these other bets. Parallel to negotiations for the vice presidential slot are talks for alliances with national parties: Lakas-CMD, the Nationalist People’s Coalition (NPC), the Nacionalista Party (NP), and the National Unity Party (NUP). Of these 4, Lakas is the obvious partner for UNA.

Suarez, Lakas co-chairman, said former president Arroyo warmed up to Binay after the Vice President said in October 2014 that the she should be allowed to post bail or be put on house arrest.

“I won’t be surprised if GMA will be very sympathetic with the VP. When we visited her, she told us to tell our people to help VP if he visits their area, not because he is running but because he is the vice president. He deserves some respect and attention. And we’ve always been identified as opposition so there is commonality [with UNA].”

Lakas has 1,000 elected officials. While the party recently clarified that it has yet to support a candidate, its president, Leyte Representative Martin Romualdez, began joining Binay’s sorties, and is named as an UNA senatorial bet. Another connection? He is Marcos’ cousin.

Binay is still open to an alliance with Marcos’ own NP, even if its members Senators Antonio Trillanes IV and Alan Peter Cayetano are his loudest critics. The Vice President is friends with former Senator Manuel Villar Jr, president of the third biggest political party.

UNA is also counting on its allies in the NPC. While many NPC members openly support Poe or Roxas, Ilagan said that former Pangasinan representative Mark Cojuangco’s endorsement of Binay carries a lot of weight. After all, Cojuangco is the son of “the boss,” NPC chairman and businessman Eduardo “Danding” Cojuangco Jr.

“NPC is the second largest political party. Of course, everybody wants to talk. But when you heard Mark Cojuangco speaking that he will support the VP, you’re not only talking about the strength and force of Pangasinan but the whole Philippines because he is a Cojuangco,” the spokesman said. The alliances are still fluid, as political players wait for Roxas to choose a running mate, and for Poe to finalize her presidential bid. While the NPC and NP are reportedly gravitating to Poe, Binay allies believe the Vice President can still muster individual support from parties.

“To each, his own. It’s not good for party mates not to support the stand of a party so they will just allow them to support who they want. Danding will say he does not want his party to break apart. NPC did that also in 2004. Why commit to one when your candidate might lose? These are all businessmen,” one of Binay’s political lieutenants said.

UNA has a September 30 deadline to select a running mate, and a 12-member senatorial ticket ahead of the October 12 to 16 filing of certificates of candidacy.

If all goes as planned, Binay himself would then have likely sealed deals with the political heir of the man he once fought, and the woman who tried several times to have him suspended.

But another cliché is more applicable: Politics is addition. – Rappler.com