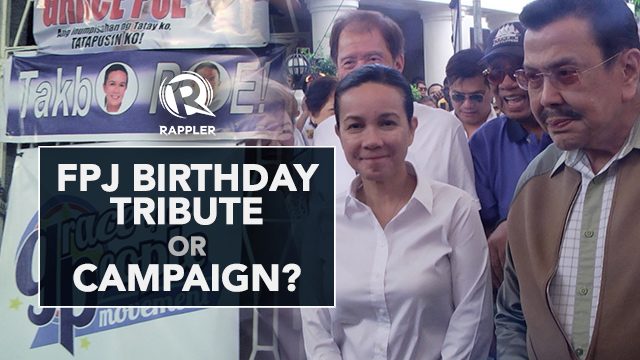 Senator Grace Poe has not declared any plans to run in 2016 but her father’s birthday party turned into a mini-campaign sortie.

Politicians are present to show support and campaign materials are all over the cemetery.

Is it a birthday party or a campaign sortie?

Hundreds of supporters nationwide flocked to the 76th birthday celebration of the the late action king Fernando Poe Jr. Posters and campaign materials are all over the cemetery.

While Senator Grace Poe has not revealed any plan to run, the event tells a different story.

Even the priest urges the lady senator to run.

FATHER LARRY FARAON, PRIEST: That’s why I’m telling you Senator Grace is not adopted. She is chosen. She is chosen by Susan and by FPJ. She was chosen by the people and will still be chosen in 2016.

JOSEPH ESTRADA, MANILA MAYOR: Of course, his daughter who is our next… Thank you.

GRACE POE, SENATOR: The Manila Mayor and former president is here because Manila cemetery is under him. But most importantly, he is here because he is a friend of FPJ. Sometimes we have different views in politics but our friendship remains. We respect each other’s decisions in politics.

Shifting alliances and Poe’s good performance in the surveys will impact the plans of her potential alies.

Earlier this week, Poe released a television advertisement for FPJ’s birthday but said it is not election-related.

Poe said she wanted to “remember and celebrate” the life of FPJ.

The similarities between father and daughter are not surprising. Both lead national preference surveys and are being hit on citizenship issues.

Observers don’t doubt the action hero’s daughter will run and this event bolsters that belief.

The big question is with whom and as what? Will she run as independent or with the administration party? Will she run for president or vice?